Hello Furiends,
It’s that time of the week again when I do my web wandering and look for feline related gems on the internet. I hope you enjoy this week’s compilation.

Two paws up for Sully the tabby cat  who rescued her human, Craig Geeves from a fire in his home . Geeves was taking an afternoon nap when Sully jumped on his chest and began meowing loudly to wake him up. He said, “She was standing on my head screaming, the loudest scream I’ve ever heard from a cat screaming at me and then I smelt the smoke and jumped out of bed … she saved my life.”

Not only did Sully save her human’s life but her timely warning kept the fire from spreading to the other houses in the neighborhood. Dogs aren’t the only creatures who are man’s best friend. Just ask Craig Geeves!

Five  cats, all rescues, were cast to play Church the feline in the Stephen King Movie. One feline dropped out after getting scared on the set, but the rest of the cat actors had a pretty cushy set up. They were accommodated in five trailers, along with their human trainers, although one had to be kept in a separate trailer from the others because it did not get along with its cat-castmates.

The film crew even built a “catio,” where the hard-working kitties could play and relax between takes. Being a feline actor is no walk in the park. They had two months of training before the ten-week shoot.  The best news is that all felines found furever homes after their acting stint was over!

Okawa City in Fukuoka prefecture is known as one of Japan’s furniture capitals. The Okawa Kagu, a furniture group in this city has now produced a line a high quality, miniature furniture for cats.

Okawa Kagu’s cat furniture is produced with the same craftmanship that goes into any other piece. Actually, the cat furniture is just miniature versions of actual pieces the furniture makers have designed. The cat sofa was designed and produced by Hiromatsu Furniture. The cat bed was designed and produced by Tateno Mokuzai. If you think you need to order furniture for you and your feline, check out the photos and videos in the article.

All I have to say is…why the heck didn’t a human invent this earlier?? My Humans (especially The Female Human) do a lot of griping about having to leave boxes around

Which box? This one or the fancy Purrfect Cat box? Alberto,, FelineOpines.net

the house so we can sit in them. The Female Human keeps meowing about this thing she calls “aesthetics” and “decor”. Well, here’s the answer to the box conundrum. the Purrfect Cat Box designed by Colorado-based inventor Scott Salzman who has this box on Indegogo. It’s made to be just the right size for ultimate kitty comfort. At about the size of a shoebox, it’s big enough for most cats to squeeze into without being cramped. Now I’d call that a “win-win”! 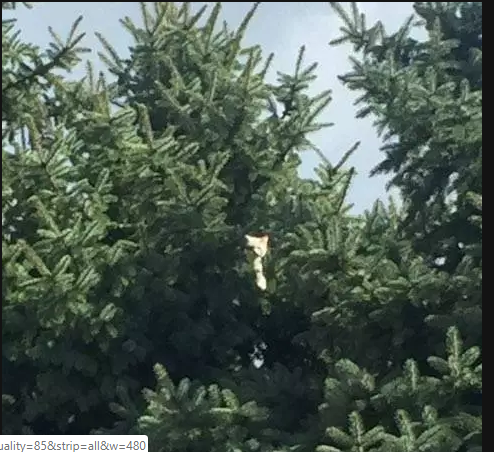 Fluffy the kitten had quite a day and could be one of the luckiest felines on the planet. Fluffy’s human saw her waaaay up in a tree. So far up that the little kitty couldn’t get herself down. It was the fire department in Stark County who rescued the kitten  after it was apparently grabbed by a hawk.

Fire Chief Rick Annen quickly theorized how the kitten ended up so far up in the tree. He saw hawks sitting on top of a barn across the street.

When firefighters realized they couldn’t reach the top of the tree, they called a tree service to help. A crew from T. Rowley Lawns used a crane and bucket to reach the little one and get her to safety.

“I’m just truly amazed that she made it that long and these guys are here to help,” Albert said. Fluffy is safe at home with her human. Two paws up for the firefighters and tree service who saved Fluffy’s life! And a word to Fluffy….stay inside!

Hi There Folks,
It’s my turn to share my feline wisdom on this week’s fill ins. This is a blog hop hosted by our furiends 15andmeowing and Four-Legged Furballs. You can hop on over to their sites and enter your blog post or, if you purrfer, just opine about your answers in the comment section of this post.
Purrs & Head Bonks,

Here are this week’s Fill In Questions:

1. The best teacher I ever had was (and is) our Alpha Tucker. He shares his wisdom with me all the time. My favorite lesson was how he taught me to find every sliver of sun and revel in it! 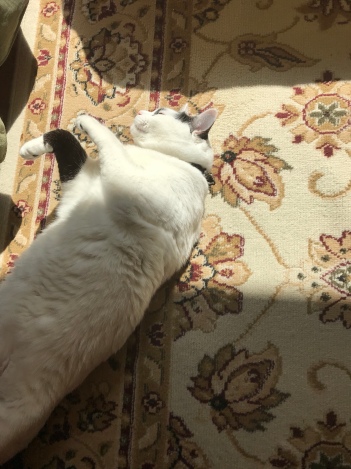 2. The worst teacher I ever had was (and is) my brother Alberto who will make me sit with him for hours watching for bugs and birds. Even if we see them, we can’t catch them because they are outside! Sheesh! 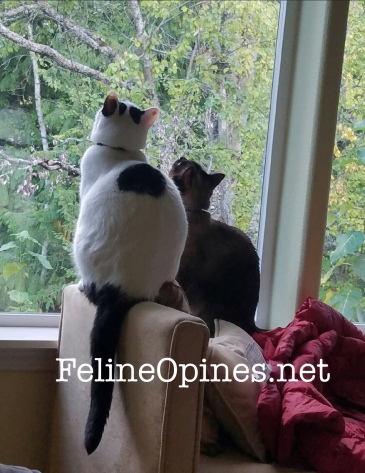 3. I recently learned how to  hide myself in a box so that if the female human came by from the right side, I can scare her silly.

4. I think everyone should know how to chill, hide and relax like a cat!

Hello Furineds,
Jasmine here. I’m taking this Friday’s fill ins. You can play along too by meandering on over to the hosts 15andmeowing and Four Legged Fur Balls and entering the blog hop or, you can opine about your answers in our comment section. Have fun!
Purrs & Head Bonks,

Here are this week’s Fill Ins:

1. My favorite Disney character is Marie from Aristocats. I don’t have a pink ribbon but I do have a pretty pink special collar. 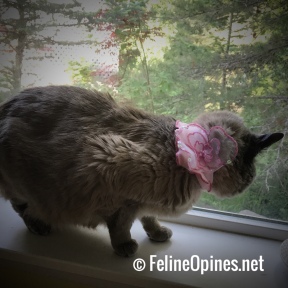 2. If I could stay any age for life, I would choose to be the age I am now. I’m older and wiser and can offer advice to the younger felines in the tribe. This is me giving everyone my “wise look”.

3. Talking is my secret talent. I am quite the conversationalist and every night, when the Humans come to bed I talk about my day (I have Siamese in me so of course I’m a talker!) I also like to chat with the Humans during the day as well.  In this photo the Female Human just said something I found quite surprising.

4. Life is like an empty box. You never know what you’ll find inside but you have to jump in, take a chance and see the world from a different purrspective. Now mind you, I am far too much of a diva to jump into empty boxes myself so I’ve included a photo of my brother, Tucker in a box.

Hi folks,
It’s Friendly Fill Ins time again. Don’t forget to head on over to 15andMeowing or Four-Legged Fur Ballsto join in the fun or you’re welcome to opine on your fill ins in our comment section.
Purrs & Head Bonks,

Here are this week’s fill ins:

1. My neighbors are very interesting forest creatures and I do all I can to reach out a paw of friendship to them.

2.The last thing I purchased online was nothing, I’m a cat, I can’t shop but I do enjoy when the humans order stuff.

3.I have never jumped on the dining room table while the humans were eating, but I do enjoy lounging there at other times.

4.Anything is possible if you believe it’s true. I am king of the jungle!

Hello All,
The Tribe of Five is taking turns answering this Friday’s Friendly Fill in Questions, hope you enjoy our answers! Remember that our good furiends at 15andmeowing and McGuffy’s Reader host this fun blog hop. You can join in or, if you purrfer, leave your fill in answers in our “opining” section.
Purrs & Head Bonks,

Here are this week’s fill in questions:

Here are this week’s responses from The Tribe of Five.

1._Having a new box keeps me happy. (By “me” we mean every member of the tribe. Boxes are the BEST!)

2. Sitting in weird positions on the sofa is the secret to making my Humans laugh. (Alberto)

3. A friend means always having a cuddle buddy. (Oliver)

4. Right now, I am thankful that the Female Human bought some “Scaredy Cat” solution for Jasmine so that maybe we can be friends again! (Lily)

Walk Through The Web Wednesday 6/23

Happy Wednesday Furiends!I don’t know how things are in your neck of he woods but things are heating up in ours – literally,. It rarely gets really hot here so when it does heat up for that one to two week time period we really suffer. Lily chose to ignore the uncomfortable temperatures and put […]

Walk Through The Web Wednesday 6/15

Hello Furiends,How are things in your neck of the woods? The Human has decided not to take anything seriously this week and has turned all our photos into cartoons. While I am a feline with a good sense of humor, I do think she’s carried things a bit too far. I will let you all […]

Hi there furiends,We are purrticipating in Brian’s Thankful Thursday blog hop. Why don’t you hop on over there and tell the world what you’re thankful for?

Walk Through the Web Wednesday 6/9

Hello there Furiends,How are things in your neck of the woods this week? Things around here have been pretty quiet but we did get some needed rain. The Human was doing the happy dance as it’s been really dry and we have lots of forests around us. Here’s a little taste of the rain out […]

Walk Through The Web Wednesday 6/2

Happy Sunny Wednesday Furiends!At least it’s sunny in our neck of the woods. The Human hasn’t done much interesting and we felines have just been relaxing and sunning on the upstairs deck any time we are allowed out (supervised, of course). The Human also did a little work in the front yard and the front […]

The Human has a place to opine

The Human has tried to horn in on our blog on numerous occasions. We are happy to announce that she has a blog where she can opine to her hearts content. The blog is on her KittyCounselor site and called, “Let’s Meow About It” http://kittycounselor.com

Walk Through The Web Wednesday 5/26

Happy Wednesday Furriends,I would like to tell you that all sort of exciting things have been happening in our neck of the woods but that would be a lie. Things are fairly boring and the BIG D-I-E-T situation is still ongoing. The Human did get our upstairs deck ready for sunning so now all we […]

Walk Through The Web Wednesday 5/19

Happy Wednesday Furiends, We had a nice week and enjoyed some warm weather. The Human got the waterfall going and we love to listen to the sound of the water when the windows are open. The Human also bought a bird feeder that sticks to the window so we can watch them eating. So far, […]

Walk Through The Web Wednesday 5/12

Happy Wednesday Furiends,We are happy as we again have our Purrsonal Assistant under control and my Wednesday feature is happening on…..Wednesday! We are still suffering through the dreaded D-I-E-T. Frankly, I don’t think Oliver has lost an ounce. Now you may think that the D-I-E-T was the only topic of conversation this week but you […]

Heaven Has A New Resident

Hey there furiends, It was a sad day today when we learned that our dear furiend Bear Cat crossed the Rainbow Bridge. Please keep his human, Momma Kat in your prayers. We’re praying that Tucker and Jasmine were there to greet him and show him all the amazing kitty places in Heaven💕 You can send […]