Hello Furiends,
It’s that time of the week again when I do my web wandering and look for feline related gems on the internet. I hope you enjoy this week’s compilation. 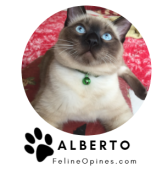 Two paws up for Sully the tabby cat  who rescued her human, Craig Geeves from a fire in his home . Geeves was taking an afternoon nap when Sully jumped on his chest and began meowing loudly to wake him up. He said, “She was standing on my head screaming, the loudest scream I’ve ever heard from a cat screaming at me and then I smelt the smoke and jumped out of bed … she saved my life.”

Not only did Sully save her human’s life but her timely warning kept the fire from spreading to the other houses in the neighborhood. Dogs aren’t the only creatures who are man’s best friend. Just ask Craig Geeves!

Five  cats, all rescues, were cast to play Church the feline in the Stephen King Movie. One feline dropped out after getting scared on the set, but the rest of the cat actors had a pretty cushy set up. They were accommodated in five trailers, along with their human trainers, although one had to be kept in a separate trailer from the others because it did not get along with its cat-castmates.

The film crew even built a “catio,” where the hard-working kitties could play and relax between takes. Being a feline actor is no walk in the park. They had two months of training before the ten-week shoot.  The best news is that all felines found furever homes after their acting stint was over!

Okawa City in Fukuoka prefecture is known as one of Japan’s furniture capitals. The Okawa Kagu, a furniture group in this city has now produced a line a high quality, miniature furniture for cats.

Okawa Kagu’s cat furniture is produced with the same craftmanship that goes into any other piece. Actually, the cat furniture is just miniature versions of actual pieces the furniture makers have designed. The cat sofa was designed and produced by Hiromatsu Furniture. The cat bed was designed and produced by Tateno Mokuzai. If you think you need to order furniture for you and your feline, check out the photos and videos in the article. 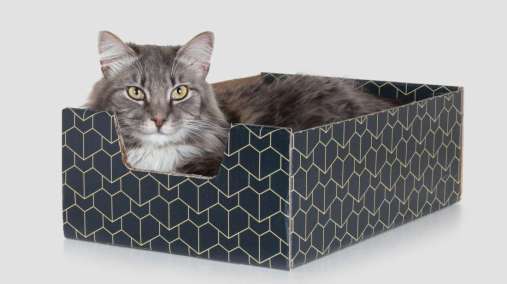 All I have to say is…why the heck didn’t a human invent this earlier?? My Humans (especially The Female Human) do a lot of griping about having to leave boxes around

Which box? This one or the fancy Purrfect Cat box? Alberto,, FelineOpines.net

the house so we can sit in them. The Female Human keeps meowing about this thing she calls “aesthetics” and “decor”. Well, here’s the answer to the box conundrum. the Purrfect Cat Box designed by Colorado-based inventor Scott Salzman who has this box on Indegogo. It’s made to be just the right size for ultimate kitty comfort. At about the size of a shoebox, it’s big enough for most cats to squeeze into without being cramped. Now I’d call that a “win-win”!

Fluffy the kitten had quite a day and could be one of the luckiest felines on the planet. Fluffy’s human saw her waaaay up in a tree. So far up that the little kitty couldn’t get herself down. It was the fire department in Stark County who rescued the kitten  after it was apparently grabbed by a hawk.

Fire Chief Rick Annen quickly theorized how the kitten ended up so far up in the tree. He saw hawks sitting on top of a barn across the street.

When firefighters realized they couldn’t reach the top of the tree, they called a tree service to help. A crew from T. Rowley Lawns used a crane and bucket to reach the little one and get her to safety.

“I’m just truly amazed that she made it that long and these guys are here to help,” Albert said. Fluffy is safe at home with her human. Two paws up for the firefighters and tree service who saved Fluffy’s life! And a word to Fluffy….stay inside!