Oliver here. I thought I’d take a break from my purrrlitical campaigning and share my more reflective side. The female human says this title is from a famous Rembrandt painting but I’ve never heard of that cat so I’m using it.

Hello Humans,
Oliver here. Since I am still technically a kitten, there is much I have yet to experience and many questions I have to ask about the world around me.

I have been hearing the humans speak a lot about this thing called “politics” and something called “the Presidential election”.  My humans have told me they are conservative, free market, state sovereignty, transparent government loving folks so if my comments lean a bit to the right, you’ll know where I got my ideas.  .

I thought I would obtain some information from the older felines in the house so I went to Tucker and his sister Jasmine. Both are twelve years old and have a few of these “Presidential elections” under their belts.

Unfortunately neither of them wanted to talk politics although I did get Tucker to say that if a candidate would guarantee a catio on every front porch, a home and food for every feral cat and a bird feeder in front of every window (kitty cable) he would definitely consider voting for that candidate.

Jasmine had no thoughts on the matter, turned her back to me, raised her tail and sashayed off. 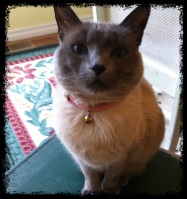 Lily is three and has had no experience in these matters.

This left me to my own devices 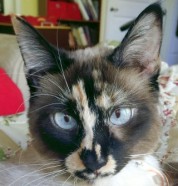 (my brother Alberto is too young and he’s a silly goofball who never sits still enough to discuss anything seriously).  I purrrrused the internet and I found a strange phenomenon of humans dressing their cats to resemble one candidate in purrrrticular.  Although amusing, this did nothing to further my political education.

And then, lo and behold, I found a CAT who is running for president. Now before I announce this furry cat-i-date’s name, I would like to go on record as saying that his name might be a bit of a marketing issue.

His name is Limberbutt McCubbins, the feline Democratic candidate for President.  When my humans saw me reading up on a Democratic candidate, they almost had a hissy fit but then they decided I should make up my own mind about my political leanings.  I read this cat-i-dates stand on the issues and there were a few I  was able to gave an enthusiastic paws up.

Cat-i-date Limberbutt’s passion for homeless cats is honorable and worthy of support. All the felines in my family were rescues and we appreciate anyone who wants to help cats have homes.

McCubbins states he has a kind heart, although I am wondering if his kind heart and compassion extend to all creatures (would he kill a helpless mouse, bird, gecko, etc. if he had the chance) or does his tolerance and compassion only extend only to certain species and breeds?

He believes in a tax code that is just for all. I would have to agree, after all, the less taxes the humans pay, the more money they have to spoil us with.  I would like to know more about his concept of fair taxes. Does he want to take kibble and treats from some cats he decides have too much and give it to other cats he thinks don’t have enough?  I might have a problem with that.

I can agree with cat-i-date LImberbutt’s desire for affordable veterinary care for all felines but before I jump on his bandwagon I’d like to know how he intends to make that happen.  There seems to be a distinct lack of specific plans here and even though I’m only a kitten I know that most humans have a limited amount of money to support us in the manner to which we are accustomed. 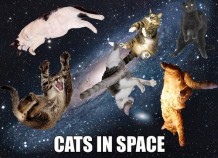 The last portion of his platform has me a bit nervous.  Limberbutt is a staunch supporter of space exploration and believes we should see a return to cat space flights. Now if he wants to send humans into space, they can go all they want. Sending cats into space? Not on your life. Who would he choose to shoot into the outer limits…felines that didn’t agree with him or felines whose pawlitical stands he doesn’t like?  Nope, not supporting that.

I guess I understand why all the humans are in such a tiz about this political stuff. There sure is a lot to think about.

Maybe we should all (humans and felines) focus on what we can agree on and instead of hissing and spitting at each other, just have a sociable nose sniff and a little back and forth meowing. Or, maybe I should throw my hat into the ring….how does “Oliver Twist Aurit” for President sound?

Walk Through The Web Wednesday 10/13

Hello Furiends,It is getting chilly in our neck of the woods and we were pleased to see that The Human called in the humans who clean and service our fireplace. This is Oliver’s favorite spot in the chilly winter months. He even made a movie about it. (Note that this movie was filmed when Oliver […]

Happy Wednesday Furiends!We’re having a beautiful fall and tomorrow the human who takes care of the thing in the living room that has flames and gives heat will be here to make sure everything is ready for our colder weather. We love that thing in the winter! Otherwise there’s nothing much new. You may remember […]

Walk Through The Web Wednesday 9/29

Happy Wednesday Furiends,I hope this day finds you well. The Human (also our Purrsonal Assistant, Staff and General Lackey) was under the weather. Now, as sorry as we were that she had a nasty sinus infection, this illness put a severe crimp in our schedule. She would go to that place she calls “work”, then […]

Every year we purrticipate in the pawsome #RememberMeThursday event to support local shelters and adoptions. Each of us came from our local shelter and so did our Angel kitties. I’m telling my adoption story this year and we want to hear YOUR adoption stories too! Just meow about it in the comments and Oliver, Alberto […]

Walk Through The Web Wednesday 9/22

Hello Furiends,I hope things are going well in your neck of the woods. The colors in our woods are beginning to change and they are beautiful ( I’ll post some photos when it gets more colorful.) The Human has been busy getting ready for Remember Me Thursday and, we’re going to be running a contest […]

Walk Through The Web Wednesday 9/15

Hello Furiends,Things are going well in our neck of the woods. When we sit on the back of the sofa and look at the downstairs garden, we can tell fall is coming and that makes us happy. What makes us unhappy is the little frog that sits in our pond and croaks loudly. I never […]

Walk Through the Web Wednesday

Hello there furiends!Happy autumn and I hope you are all enjoying nice weather! For those near fires, those who have had floods and those who were in the path of Ida, we have been purraying for you all! We are finally done with the unusually stifling heat and are having a beautiful fall. Now that […]

Walk Through The Web Wednesday 9/01

Well hello there furiends,It’s the fist day of September and it’s a lovely fall day in our neck of the woods. It’s been a strange couple of months. We went from telling The Human, “Move the fan closer to me” to “Put another blanket on the bed!” But it is beautiful now and we are […]

Walk Through The Web Wednesday 8/25

Happy Wednesday Furiends!The weather is cooling and we’ve had a few days of rain and some of the fires around us are almost contained! We are so thankful for this and purray that everyone with fires around them would be safe and fires would be out. I wanted to take a moment to “chat” with […]

Walk Through The Web Wednesday 8/18

Hello Furiends,Before I get into happenings in our neck of the woods I wanted to thank all of for voting and sharing the information about my attempt to get my mug on a beer can and also raise money for the Charleston Animal Society. Oliver wanted to be a part of this so I let […]