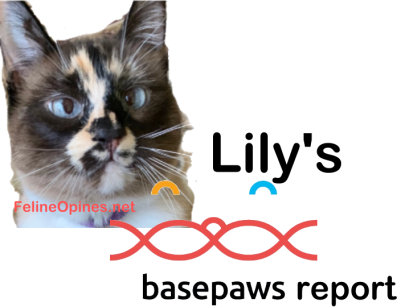 Hello There Furiends,
Before I get into the good stuff, I have to provide a thing you humans call a “disclosure” about my interaction with the Basepaws company. We were provides with a complimentary Basepaws kit in exchange for my opinion of the process and the product. All of the included images, the written content and the opinions are original and from Feline Opines. Although I’ve linked to the company these are not affiliate links and Feline Opines receives no commission or monetary gain from purchases. I just like to tell my furiends about new, cool stuff. 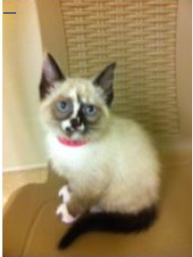 This is me at the shelter the day I met The Female Human. – Lily

And now for the moment you’ve been waiting for…..my report!

The fourth feline group is the Polycat group which describes mixed breed cats, 95% of all cats in the world are mixed breed felines. Before Basepaws DNA testing we knew nothing about them and now, as they add more purebred data and trait information they will be able to begin narrowing down the parts of the genome that are responsible for certain traits.

The Western, Eastern and Hybrid groups are based on the DNA of purebred cats in their database. As the company grows and adds more DNA they will be able to narrow down the specific genomic regions .  I was assigned to the  Western Breed Group. Now this does’t mean that I necessarily have “prebred” relatives. It means that the certain genomic regions are the ones that I am most similar to and they ranked me with three breeds by how similar I am to a specific breed and the rest of the database.

First of all neither the Female Human nor I are very scientific so I’m going to try and make this as simple as possible.  If you have an inquiring mind and enjoy science, you might want to check out this information (even though it’s from The National Human Genome Research Institute.

The Basepaws folks sequenced my DNA and it resulted in 8,626,137 DNA fragments that were sequenced and that represents 1,089,039,875 DNA bases that were sequenced (these numbers are a little big for this simple feline to understand). Using that data in addition to the latest cat genome (felis_catus_9.01 – felis catus is a fancy word for “domestic cat”). They analyzed genetic variants across 18 chromosomes to generate my report.

Phew, not that the “sciency” stuff is over let’s dig in to the really interesting stuff.

Let’s Talk About Me

I was assigned to the Western Breed Group and here are the three breeds I am most similar to:

Meowza! I’m like a breed that is believed to be 1-000-2,000 years old. My DNA ancestors originated in Norway (now I know why I like the winters here). Norwegian Forest Cats are generally healthy and strong but also more prone to Diabetes mellitus (a metabolic disorder where blood sugar levels remain high for long periods of time. This is something my veterinarian can watch out for on my yearly wellness visits. The purrsonality traits of this breed makes them friendly, social and independent. I’m friendly with people I know and just like this breed, I am friendly on my own terms. I’m not so social but I’m very independent! They have favorite humans (that is so true) and tend to be picky about whose lap they sit in (me again). The Norwegian Forest Cat in me is where I get my love of climbing and The Female Human has great climbing alternatives for me in high places to satisfy the Forest Cat DNA in me. 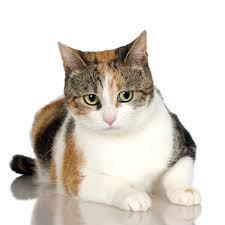 This part of my DNA is responsible for my stellar hunting skills. I don’t have the large head, powerful jaws and full cheeks like most American Shorthairs. American Shorthairs have a variety of coat colors. That’s definitely me! And their eyes are large and distinctive. Me again. The American Shorthair DNA in me may make me affected by hypertrophic cardiomyopathy. There is also sometimes a problem with dermoid cysts, and some facial issues like cleft palate but thankfully, I don’t have any of these problems.  As far as purrsonality is concerned, the fact that they aren’t known as lap cats is me to a T. They appreciate a spot near their humans on the sofa and that is really me. I’m called “Lily Bug” because I always snuggle against humans when they sit on the sofa (my version of being a love bug). Another purrsonality trait that is all me is that I am fine on my own and can entertain myself. I do love to find a good sun puddle and hang there all day, another indication that I have much in common with the American Shorthair.

Also called The Siberian Forest Cat. I don’t have the plush long coat of these guys. This is the national animal of Russia, cool. I think this must be where I got my crazy coat because the coats for these cats range from tabby, solid, tortoiseshell and color point. To get one of these breed kittens will cost  you a lot of moola and that’s why they’re rare outside of Europe. I hope The Female Human appreciates me for the rare treasure I am. There are no documented known health conditions that plague this breed so that makes me feel good. It is interesting that Siberian Forest Cats are considered to be a hypoallergenic breed because they produce less FelD1 that is the allergen thought to be the culprit in causing allergic reactions in humans. I think I fit the personality description to a T, brave, independent, easygoing and affectionate.

My favorite part of the report is that it said the wild cat I was most similar to is the leopard. Pretty cool huh?

And Now The Contest & Winner

Thanks to all of you who purrticipated in my Basepaws DNA contest. The #1 breed guess was Siamese with American Shorthair coming in second. There were many others, Tortiseshell, Birman, Burmese, Main Coon, Persian, Turkish Van, Calico, Tonkinese, Snowshoe and Exotic.

Unfortunately, no one got all three but don’t feel bad, The Female Human didn’t pick even one of the breeds. We put all the names in a basket and I batted them around for a while before I had The Female Human pick one out (with her eyes closed, of course) and the winner is…….messymimimeanderings! Please let us know the address to send the books and they’ll be on their way to you. You can use the form below to send the info.

Well, I hope you enjoyed my report. If you have your humans do your DNA, let us know about your results.

Hello There,
It’s Lily. I’m doing the friendly fill ins this week. I hope you enjoy my answers. You are always welcome to purrrticipate. Head on over to McGuffy’s Reader and join the blog hop. Post your comments with our friends and fill ins co-hosts at 15andmeowing or, feel free to leave your fill in info in the comments of my post.
Purrs & Head Bonks,
Lily 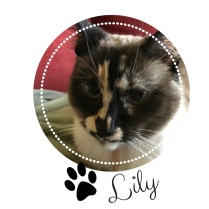 Here are the blank fill ins for this week:

1.My Chinese zodiac animal sign is a cat, of course. Now if the truth be told, I have no idea about the zodiac, Chinese or otherwise but I did have The Female Human research it for me and imagine my dismay when she told me there is no year of the Cat in the Chinese Zodiac. There’s a year of the tiger and as much as I like tigers, I’m a cat. So, no Chinese zodiac animal sign for me but I’m digging the outfit!

2. My zodiac sign is Aries, I guess. I’m not much into this sign thing but I do know I was brought to the shelter in April when I was a kitten. I don’t remember when and The Female Human told me that what sign I am depends on when in April I was born. This is all a bit too confusing to me. I’m sure I’m not a bull, and I can fly pretty high when I jump up on the counter or the counter stools, so I’ll pick Aries. 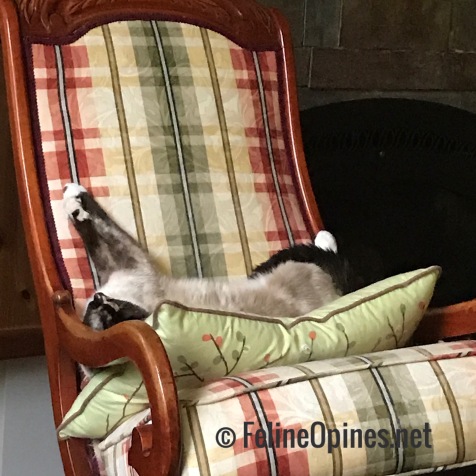 3. Income Tax season is a complete and total disaster for our humans. Every year The Female Human runs around like her hair’s on fire. I mean, if this thing happens every year, why does she get her whiskers in such a twist about it? Humans, go figure. I  suggest she take a feline approach to taxes and just chill. 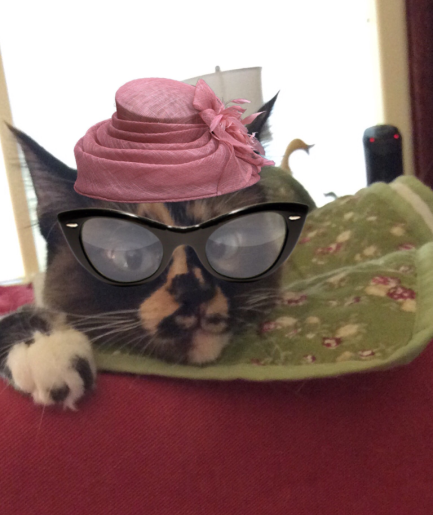 4.In hindsight I should have NEVER allowed The Female Human to photograph me in that pink hat!
Follow Feline Opines on WordPress.com

Things are not panning out as Alberto thought they would.

Walk Through The Web Wednesday 1/08

Hello there furiends,Yes, I admit it, I took some time off and I quite enjoyed the rest (you know we felines need our rest!) But the proverbial party is over and it’s time to get back to work. I have a lot to cover since I’ve been slacking (and gave our Purrsonal assistant some time […]

Are you celebrating with Oliver?

Not Walkin' This Wednesday

Hello Furiends,The staff was not on the ball these past few weeks and I do apologize for that. I have no intention of walking through the web this Wednesday because it is an official day off. I would like to mention however, that this is “Walk Your Pet Month” and I have to say The […]

How Dare You Call My Cat Geriatric! (The Female Human Opines)

Although I didn’t say the words out loud that‘s exactly what I thought all those years ago when my beloved Miss P was being examined by the vet. I struggled to paste a smile on my face as I gazed into the blue eyes of my sassy Lynx Point feline. Granted, she was 10 years […]

I move toward the counter at the pharmacy, thankful for the HIPAA regulations that require a generous space between people in line.  The woman at the register stands, fingers poised over the keys. “Hello, name please.” I lean in toward her, whispering, “Aurit, Tucker Aurit.” She smiles and asks, “Date of birth?” There is an […]

Walk Through The Web Wednesday 12/18

Hello there furiends,How is your week going? The Tribe of Five is getting in the holiday spirit and the weather humans are saying we’re going to have two days of holiday snow. I realize that today’s picture on Weather Kitty is a bit deceptive, what with the sunshine and green grass and all but you […]