It’s The Female Human here and the Tribe gave me some space on this post to tell you that this coming Thursday is one of our favorite days. Please come back on Thursday and join us in celebrating and please share your photos of your adopted kitties on our Facebook page. And don’t forget to check out all the awesome things at the Remember Me Thursday Links. Now I’ll turn it over to The Tribe. 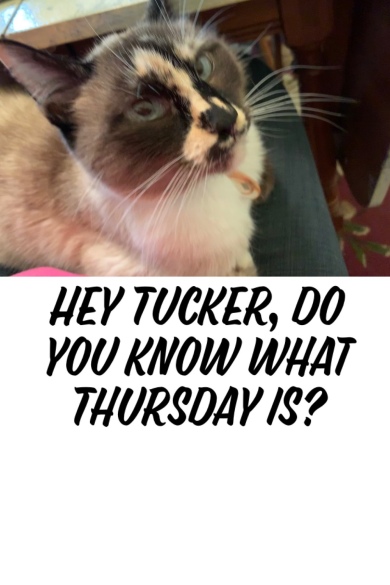 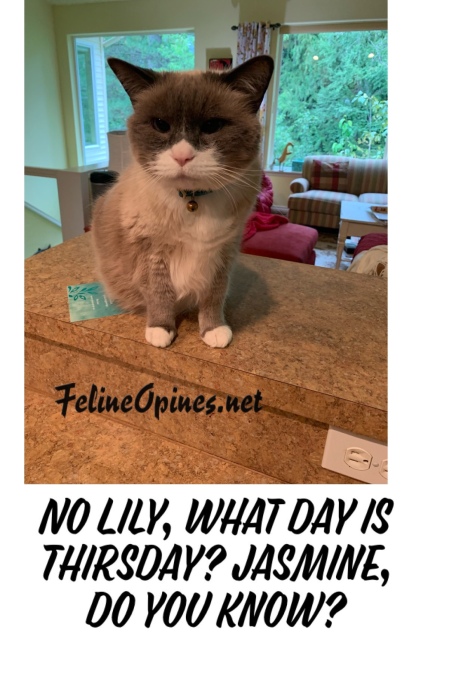 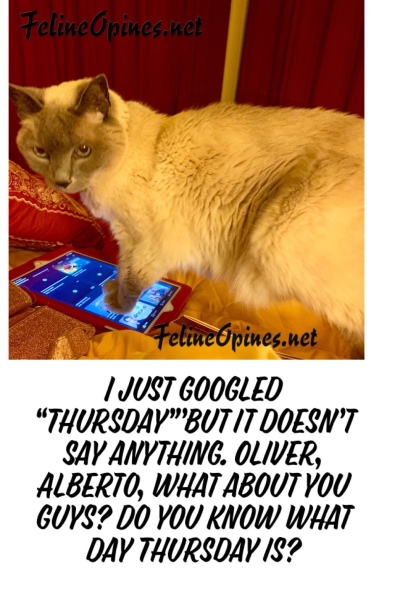 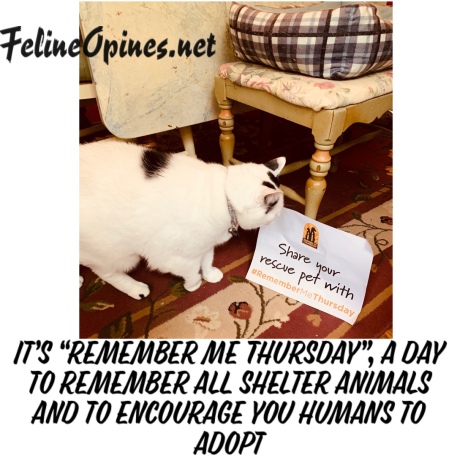 As you may know, all of the Tribe of Five are adopted kitties and we purrticipate in #RememberMeThursday every year to bring awareness about cat adoption.

Because we are feline bloggers whose meows are heard around the world we belong to a number of international cat groups. We get to “meet” some pretty amazing folks on the web who take cat adoption seriously.

One of our favorite internet humans is a man named  László who lives in Eastern Europe.  We met him and his clowder through a Facebook group called Our Cats <3.  Our female human says that the internet can be an unfriendly place. Even the safe haven of cat groups can be a dangerous place as she’s seen a post from someone asking for advice receive judgmental and divisive responses. I would think that  a mutual love of cats would bring you humans together but sadly, that is not always the case.  Happily the Our Cats group is not like this. 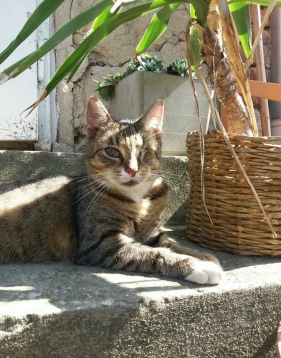 As soon as we joined the Our Cats group we became furiends of László’s  tribe of adopted felines.  The diamond in his crown of cats is Apollo, who he calls Apollo Bug. This sweet one-eyed tabby is beautiful and delightful and every photo László shares shows how much Apollo Bug is loved, as well as all the other rescue felines in the household.

László and his family are wonderful humans who never turn their backs on a rescue cat in need.  About a year ago, they rescued a little black female cat and soon found out she was pregnant. There was no question that those kittens would

become a part of the family and the group members have enjoyed watching them grow up loved, protected and happy.  The Female Human says that  over 168,000 members of this group are connected to this clowder of cats.

In August the group received disturbing news and our Female Human had leaky eyes after she read a post about Apollo Bug. He was taken to the vet for an emergency visit and was diagnosed with  dangerous urinary issues. The vet put a cone on him and gave him a catheter.  The photos of poor Apollo Bug were heart rendering.

That’s when the humans in the  group sprang into action. Posts of encouragement, love and prayers flooded the internet and an international fund-raising effort was created. The multiple vet visits, special food and other costs were overwhelming for László and his family and although they never asked for help, the humans in the group wanted to help this sweet little rescue kitty and the humans who cared for him and the rest of their felines.

We followed Apollo’s recuperation and recovery with our hearts in our throats and when the post appeared that the catheter had been removed and Apollo had peed on his own, there was a collective sigh of relief and the sound of rejoicing (and lots of happy meows from The Tribe of Five). 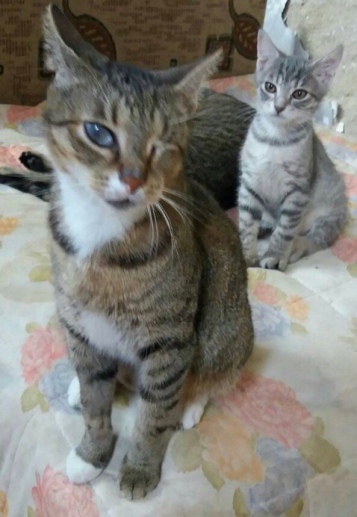 And after celebrating Apollo Bug’s return to health, we had another celebration when László announced the addition of the newest rescue to his family. Meet little Raisin, shown here with his big brother Apollo.

Humans opine on and on about their view of the world and think their meowing will bring people together but they rarely are successful.  They could learn from the story of this rescue cat and his humans who brought 168,000 people around the world together with love, prayers and help.

Never underestimate the power of even one little rescue cat! 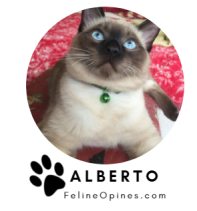 Hello All,
Oliver here. The Tribe of Five have so much to be thankful for that I decided I’d jump on over to Brian’s Home and his Thankful Thursday Blog Hop.

I am thankful for cuddles. Our Tribe is made up of adopted kitties. The oldest, Alpha Tucker (he’s the one in the middle), his sister Jasmine, Lily and my brother Alberto and myself. You’ll never see a photo of all five of us snuggled together but I love this photo because it shows how well this diverse group of felines get along. Alberto and I are the newest Tribe members and we’re accepted and loved by all the other felines.

Cuddles are great and love, acceptance and adoption are even better!

Hi There,
Oliver here. It’s pawty time again and I’m hosting this one. When #TheTribeOfFive was deciding which blog post of ours to feature, I stretched out and contemplated for quite a

while. I finally decided that we wanted to highlight our “Let’s Talk About Adoption” post, even though it was for Remember Me Thursday on Sept. 28. Pet adoption is a big deal in our house (all five of us are rescues) and besides, you get to see the awesome kitten pictures of each of us (and a tribute to  Miss P. and Buster who crossed over the Rainbow Bridge).

But enough about us, here are my three picks from the last party, enjoy and please join us in the Linky Party Festivities, all species of pets are welcome!
Purrs & Head Bonks,
Oliver

I always love to read about the goings on in Erin’s regal residence and this story had me enthralled. Seems Erin found herself on the high seas with quite a cast of characters. This is what happens when you take International Talk Like a Pirate Day too seriously!

A Beautiful Tribute To Zoe – 15andmeowing

We love the felines at this wonderful blog. They took the time to send love and condolences to our friends at Animal Shelter Volunteer Life on the loss of their beloved fur kid Zoe. The Tribe of Five sends our love and prayers as well. Say hello to Miss P. and Buster Zoe!

I love to read the updates from the female felines at this blog. Dolly is one pretty kitty and the two sisters here at the Tribe of Five are thinking a “Sister Saturday” would be a good idea on our blog as the brothers seem to take over the blog writing! 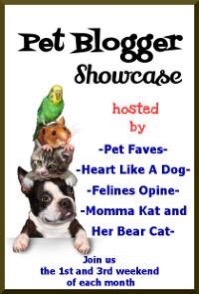 This is the place for you to show off your favorite family friendly pet related posts, find other great posts to read, show some love to other bloggers and maybe be featured on one of the host blogs!

Meet the Hosts Behind the Showcase:
Pet Faves– Living the pet lover lifestyle
Heart Like A Dog– The good, the bad, and the Oh My God of living with dogs
Felines Opines– The world from a feline point of view
Momma Kat and Her Bear Cat– The humorous and touching tales of a formerly homeless, yet always extraordinary, feline and his Momma, who’s just along for the ride.

Twice a month, On the 1st and 3rd Saturday of the month, you have the chance to link up one of your blog posts to the linky party link-up. Then visit 3 other blogs that joined the party and leave a meaningful comment. Feel free to share with your followers on Facebook, Pinterest, Twitter, etc. Then each week the hosts will feature their favorite 3 posts from the previous Linky Party on the new party post.

*Note: By adding your post to the linky party you are giving the hosts permission to use an image from your post if your post will be a featured post on their blog to help encourage people to click through to your post. The image may be used individually or as a collage.

That’s it! No need to RSVP. No need to bring a covered dish. No need to add the linky to your post. No need to include a button. Just come join the party and PAWTY ON!

Walk Through The Web Wednesday 2/19

Hello Furiends,We’re getting used to the “new normal” at our house since Angel Tucker crossed the Rainbow Bridge. As my brother Oliver and I are still young-ish felines we are easily bored and always looking for a bit of fun. Lately, our “fun” has consisted of chasing Lily down the stairs and then not letting […]

May you always have a cuddle buddy to snuggle with❣️

Walk Through The Web Wednesday 2/12

Hello Furiends,I didn’t want to miss my regular Wednesday feature although things have been a bit sad at our house because of the loss of Tucker. The Female Human still gets leaky eyes when people talk about him but she is getting better and she’s thankful for all the kind words you furiends have been […]

Dear Furiends, The Female Human asked me to pop in and say thank you for all your messages and condolences at the loss of our beloved Tucker. She’s struggling to get through them all without getting “leaky eyes” but she’ll be responding soon. And, of course I’ll be reporting on my regular Wednesday feature. You […]

A piece of my heart is in heaven

This is The Female Human. We had to say good-bye to Tucker tonight. It was a quick decline (kidney cancer) and his last hours were comfortable. My heart is shattered.

Walk Through The Web Wednesday 2/5

Hello There Furiends,How has your week been going? Things are still pretty boring at our house so I decided I’d have to find some excitement on my own. The Female Human has this thing she calls a “foyer” (I call it the hallway by the front door) which she likes to decorate for the seasons […]

Walk Through The Web Wednesday 1/29

Hello Furiends,How was your week? It’s been rainy and to be honest, pretty boring. My brofur Oliver and I spent the week hanging out and being lazy. Lily and Tucker felt the same and, as you can see by Lily’s expression, boredom is definitely an issue! The good news is that The Female Human got […]

Walk Through The Web Wednesday 1/22

Hello Furiends,Greetings from the snowy, blowy Inland Northwest. The humans are slipping and sliding all over the roads in their metal machines. We felines, on the other hand are staying close to home and keeping cozy. I have been working though. Seems as if I can’t leave our Purrsonal Assistant alone for a minute so […]

What is Your Cat Asking You Today?

The Tribe of Five is celebrating National Answer Your Cat’s Question Day today.