Hello There Furiends,
That saying you humans like to meow about that “April showers bring May flowers” is proving to be true. There are tulips beginning to pop up in the garden and there should be some nice color if the deer don’t eat them first. 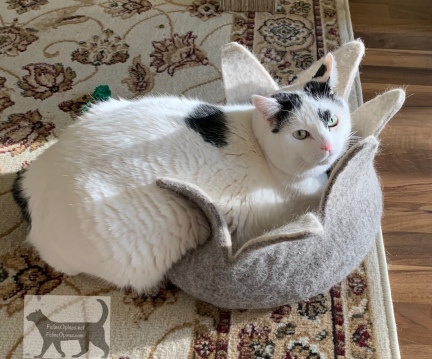 Oliver tried to convince me that he sat in our felted bed this way because it was getting too warm to sleep inside it. I told Oliver I thought his expanding girth was proving to be too much to fit into the bed. Oliver was not amused.

I hope you enjoy my web wanderings this week.
Purrs & Head Bonks,
Alberto 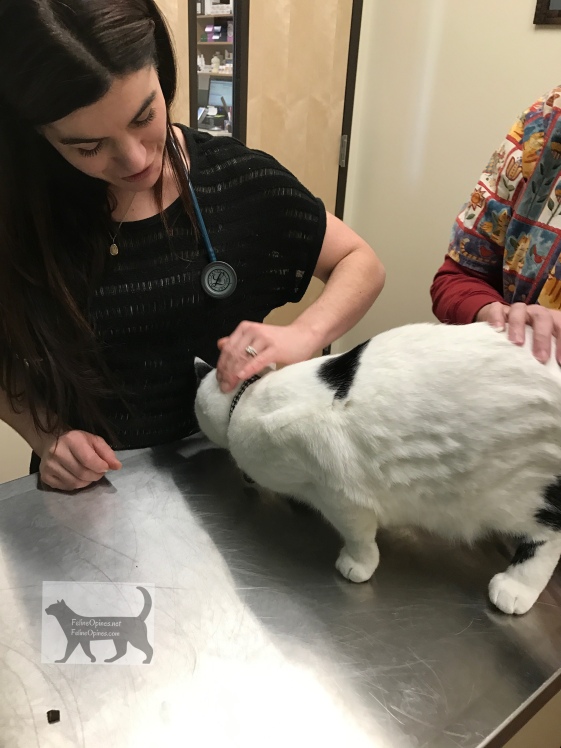 Oliver and one of our favorite vets, Dr. Christina Ponsness at Pend Oreille Veterinary Service

So, not only do the humans get to save some money but the felines are relieved of the stress of being shoved in a carrier and taken in the moving metal machine to the place of the stabby people.

First Vet’s study of their business in Sweden has found that roughly half of all cases that result in a visit to the vet could be taken care of by a remote consultation.

This sounds pretty good to me, what do my feline and human furiends think about this?

Have you watched Oliver’s film,, “Bring Me My Catpuccino!”

CatCon, “the ComicCon for cat people” has joined with Instagram’s to showcase most-followed cat accounts to celebrate the internet’s greatest cat videos.

If you and your humans are lucky enough to get to Cat Con at  the  Pasadena Convention Center in California, you can mingle with 62,000 other international feline fans.

The Cats Of Instagram account — which has 10.3 million followers and features a running tab of adorable cat pics and videos — will be hosting the inaugural CatCon Video Festival. And all my furiends can submit their own videos (we submitted two of ours, “Bring Me My Catpuccino” and “You Never Walk Alone”.   A grand prize winner will receive a $500 gift card.

“Cats of Instagram has been part of CatCon since the beginning in 2015, and it made purr-fect sense to up the ante this year and partner with them on CatCon Video Fest,” CatCon creator Susan Michals said in a statement. “Together we plan to bring the audience at CatCon 2019 the best vids from across the country, IRL on the big screen.” Meow, sure wish we could go there!

The next time you humans start meowing about how bad kids are today, you need to remember 15-year old Blake Austin. Blake has clocked nearly 1,900 hours of playtime with the felines at the Brunswick Midcoast Humane society. She also fosters kittens. Her dad has a severe cat allergy so she never got to have a cat when she was growing up until her father realized how much cats meant to her and made her a “cats only” room. Blake’s love of cats and her tireless devotion to the felines at her shelter has garnered her much notice and she even received a $10,000.00 gift. Meowza, being nice to kitties pays off-literally!

This one’s for all you may-saying humans who think we felines don’t have a heart.. Pusha, the cat who lives in a park in Bakhchisaray, Crimea. She came across four young squirrels who’d lost their parents, and rather ignoring them or attacking them, she took care of them and even let the squirrels drink her milk as if they were her own kittens.

The squirrels seem quite happy with this family arrangement. Pusha treats them like her own, cleaning them and giving them a gentle nudge when they’re misbehaving.

Brace yourselves, cat lovers. Meow DC is a new festival for feline fanatics.

Coco the Couture Cat letting her love child side out at Blogpaws 2016.

Emily Miller, director of special events for the Humane Rescue Alliance, decided to create Meow DC, an annual festival for feline fanatics —where ticket proceeds will go toward the alliance’s mission of helping homeless pets.

“Meow DC is a place for cat people to get together and celebrate all things cat.”

More than 100 adoptable cats were brought to the Dock 5 parking lot because the venue doesn’t allow cats indoors. The specialized RVs had big windows that allow people to see the cats from outside.

Booths just outside the venue’s entrance will house Meow DC’s two celebrity cats — Sunglass Cat and Coco the Couture Cat. An Instagram star with over half a million followers, Sunglass Cat will be taking pictures with fans for $15, which will go to the alliance. Coco, a Cornish Rex who gets around in a pink “Catillac,” will be paw-tographing copies of the book “The Adventures of Coco le Chat: The World’s Most Fashionable Feline.” (Note, The Female Human has met Coco the Couture Cat many times and will see her and her human again at the Cat Writer’s Association conference.)

There were events for kiddos who love cats and lots of vendors who offered purrfect feline products.

Walk Through the Web Wednesday 9/23

Hello there furiends,We are getting ready for fall in our neck of the woods and the colors are just beginning to change. Now that it’s cooler some of us are rethinking our stance on snuggling. As some of you know, Angel Tucker was Lily’s cuddle buddy and you’d never see him without her snuggled in […]

Remember Me Thursday. See The Light for Pet Adoption.

Today, September 24, 2020, the entire world will share the importance of pet adoption, and shine a light on all orphan pets waiting in shelters and rescues. In 2017, people using #RememberMeThursday reached nearly 330 million people on social media. On #RememberMeThursday, love your rescue and help others #SeeTheLight. It’s up to you to spread the word! We […]

Head on over to Comedy Plus and join the blog hop!

Walk Through The Web Wednesday 9/16

Hello there furiends, I hope you are doing well. Because of the fires and the terrible smoke, walks in the cat stroller have been momentarily stopped and the windows in our house remain firmly closed. We had a nasty wind storm last week and then some fires in our neck of the woods. Many of […]

Walk Through The Web Wednesday..on Thursday 9/10

Hello Furiends, Well, we finally got through the “eternal computer upgrade” and have our Purrsonal Assistant on the job again, albeit it a day late. Sigh. It’s been an interesting week in our neck of the woods and we, like many of our readers, are surrounded by fires. We’ve been putting our paws together and […]

Due to circumstances beyond our control…..

Hello there furiends, We have been staring at this screen since this morning and it appears that my Wednesday feature may be happening on Thursday 🙀🙀🙀 Purrs & Head Bonks, Alberto

Walk Through The Web Wednesday 9/2

Hello Furiends,I don’t know about you but we are happy to see September here in our neck of the woods. It’s still warm but not hot and pretty soon it will be leaf chasing time for Olliver. We went to the stabby place for what The Human called a “wellness” visit. Ever since our Angel […]

Our angels leave forever paw prints on our hearts💕. We are purrticipating in Rainbow Bridge Remembrance Day.This special event and blog hop was established by Deb Barnes to honor our beloved fur kids. We invite you to join the blog hop or tell us about your Rainbow Bridge fur kids in the comments.