How are things in your neck of the woods? Our woods are getting a bit windy and frosty these days. Now mind you, we felines understand that we live in a four seasons kind of place but good grief, there needs to be some rules about when these seasons start. We already had snow last week (before The Female Human had time to get rid of the leaves in the yard!). Thankfully the snow didn’t stay but brrrrrr is it chilly and windy out there. Oliver was watching the enthusiastic waving of the flag on our front porch the other day.

Last weekend it got so chilly that The Female Human turned on the fireplace (yes, she’s lazy, we have a gas fireplace so all she has to do is flick a switch and not drag in a bunch of wood.) Oliver loves the fireplace so much that he even made a movie about it. Sometimes I wonder about my brofur.

The Tribe is back to snuggling together again too. I do sometimes wonder if Oliver has any concept of personal space though. 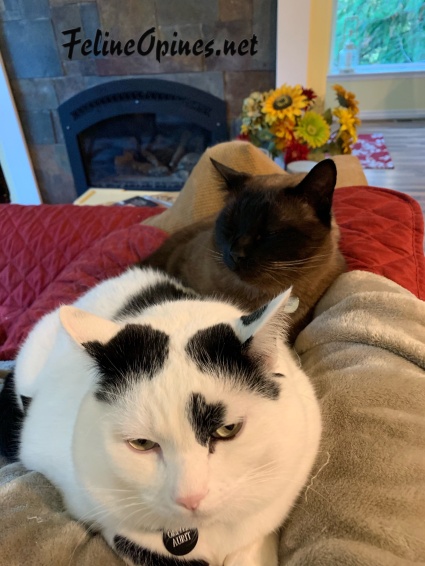 I checked in with Jasmine and she said she is feeling great now that The Female Human has been giving her Scruffy Paws Kidney Vitalize Chews. And wonder of wonder, Miss Picky really likes them! She’s put on a bit more weight although our furry diva has always been very tiny. 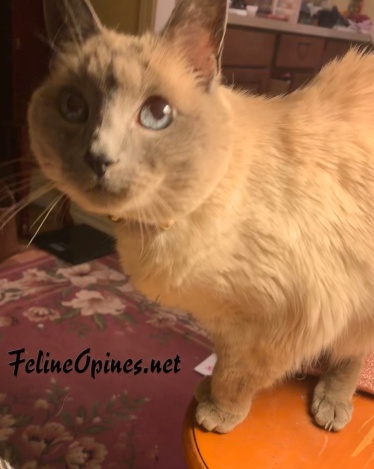 Alberto, what are you doing in my room? I’d really rather be alone!” -Jasmine

All in all, things are quite fine at our house and, as you can see, I’m just chillin’ and waiting for The Female Human to open a drawer or cabinet so I can get into it and look for rubber bands, plastic, or any other enticing thing to play with.

A different kind of love

Love doesn’t always look the way you think it should. Take Mo and Cricket for instance. Mo, a feline, is in love with his next door canine neighbor, Cricket.  Mo loves Cricket so much that he heads over to Cricket’s house every day.

George, a 7-year old rescue Tabby is a special breed of adventure cat because he likes to choose his own adventures and go sans humans. He’s tried to hitch a ride to Scotland, regularly sneaks onto public busses ending up miles from home and even likes to take the occasional train trip. His travels have now been chronicled on Facebook and his page also helps those who have encountered George, far from his home, contact his humans. There are many “George sightings” on his page.

George’s usual trips take him away from home for about three hours and, if he is gone longer his humans know that it’s time to put out the alarm. When George is home he is a great comfort and feline nursemaid to his human, Dennis who suffers from dementia. And George loves to be held and petted by any humans he comes across outside of the house.

One of George’s recent adventures took him in the direction of a  safari park with a bunch of school kids. George didn’t make the full journey however, his human said, “Fortunately the bus stopped and chucked him out before arriving there.”

The epitome of Feline Fashion – a behind the scenes look

Those of you who follow my Wednesday web wanderings know I love to report on this event. The Algonquin Cat’s Annual Celebration & Cat Fashion Show has been happening for 10 years in early August. It’s a benefit for The Mayors Alliance for NYC’s Animals. This year the theme was “It’s a small world” and cats were dressed up to represent nine different countries. Be sure and watch the behind the scenes video.

Revenge is sweet – and wet!

You humans say that you can be petty to each other, well evidently that goes for cats too. These two got into a hilariously petty (and one-sided) cat fight.

The story was first posted on Twitter, the feline’s human said, “My cat came inside soaking wet, so I did some investigating and found this. She posted a video. Then she noted in another Tweet, “We did a further investigation, it was plotted revenge.” Both videos document the altercation and are hilarious (unless you’re the cat that got shoved in the pool).

How to hold a cat

Snark warning – I can’t believe a human actually wrote an article about how to hold a cat. Cats are all different and you need to get to know us so you can understand HOW we want to be held and IF we want to be held. Take Lily for instance. She does NOT want to be held and for the foolish human who refuses to believe this, The Female Human always has a supply of bandages available.

For every rule about holding a cat, there are cats who break those rules so, humans, read this article if you must be remember, not all cats are alike.

Walk Through The Web Wednesday 8/12

Hello Furiends,I hope this week finds you well. So many of my feline buddies have suffered through hurricanes, tornadoes, wind storms and lightning storms. Meowza, it’s dangerous out there and purraying you all are safe. The most important news of the week for our neck of the woods is that we won a Muse Medallion […]

If it’s not too much effort, Oliver invites you to join the celebration.

Walk Through The Web Wednesday 8/5

Hello Furiends,Well, The Tribe has been languishing in the heat that we are experiencing in our neck of the woods. We have no desire to do anything except hang out on the upstairs deck, sleep and eat (and Oliver and I occasionally like to bully Lily, which we get in trouble for). This will explain […]

Hello There Furiends,It’s been a while since we purrticipated in Friday fill-ins and we’re looking forward to joining the blog hop this week. Every Thursday Ellen of 15andmeowing and Lorianne of Four-Legged Furballs, provide Friendly Fill-in questions. All you need to do is answer the questions and then join the “hop”. You are always welcome to meow your […]

Walk Through The Web Wednesday 7/29

Hello Furiends,Well, the heat finally hit our neck of the woods. None of us are thrilled about it. Thankfully, The Female Human invited us out to the upstairs deck. It was wonderful but we did tell her the deck could do with a good sweeping! Well, it was a nice time outside and if it […]

Always In Our Hearts

We have some wonderful furiends at Zoolatry who create beautiful monthly tributes to those who have crossed the Rainbow Bridge. We wanted to share the tributes for our Angel Tribe members Tucker and his sister Jasmine. We sure do miss them! If you click on the photo it will take you to their memorial page

On this holiday Alberto is thankful for alternate cooling methods!

Walk Through The Web Wednesday 7/22

Hello Furiends,It’s been rather boring in our neck of the woods. The Female Human’s ankle is healing nicely and our pampering schedule is back to normal. It has been a bit warm. We’re not used to any temperature in the high 80’s so when it gets hot, we just hang out and do as little […]

Walk Through The Web Wednesday 7/15

Hello There Furiends,It’s been rather quiet in our neck of the woods as our Human was a bit incapacitated this week. I wish I had an exciting story to tell you about how this happened but sadly, it was a rather dumb “accident”. She exited her car a few days ago, clad in a pair […]

The Tribe Opines about how to celebrate Anti-Boredom month

The Tribe at FelineOpines wants to help you fight off boredom so they’ve put together some suggestions to keep you free of ennui. Discover Your Inner Chef – Explore The Kitchen: Learn to Cook or Sharpen Your Cooking Skills Discover Your Hidden Talents -Decorating, Writing, Media, etc. Take a stroll, sniff the air, find a […]