Alberto here with my Wednesday purrrrusal of all things feline on the world wide web. Without fur-ther ado, let’s get started. 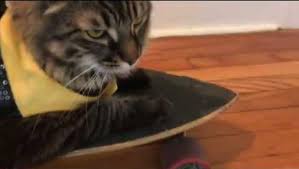 We felines are an athletic lot and Daryl from Northeast Ohio proves my point! He’s quite adept at skateboarding and about as fearless a feline as you’d ever hope to meet. 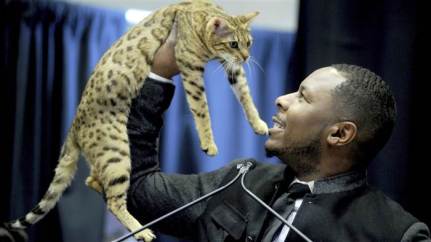 Well folks, it’s the end of an era and cats prove that they are taking over the world. The famous Westminster Dog show actually featured felines this year?  If you’re wondering why, allow me to enlighten you. Now before any of you canine fans get your tails in a twist, yes, for the first time in the events 140 year history felines were in attendance but they did not compete, they were part of a “meet the breeds” event. Still, not too shabby for us felines and who knows, today the Westminster Dog Show, tomorrow the Iditarod (snuggled safely inside the sleigh, of course.) 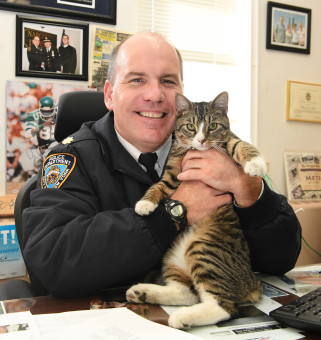 Those of you who follow my Wednesday posts know how much I love stories about working cats. This little guy. Martin, (officially Officer Martin D. Costanza) the handsome Tabby was found by some NYPD officers when he was a kitten. The officers convinced the powers that be that Officer Costanza would be a morale booster and that he is. Every morning, Officer Martin makes an appearance at roll call to “inspect everyone” and spread a little joy in the station house. 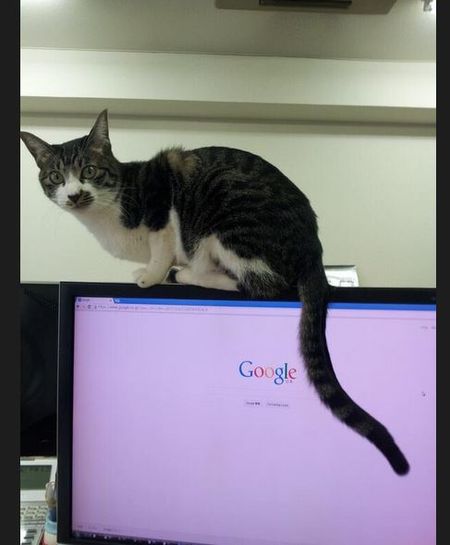 While we’re on the subject as felines as job morale boosters, check out this Japanese office that “employs” nine felines. In addition to the furry feline employees, this office celebrates every day as “bring your pet to work day”. And if you aren’t impressed enough with this feline friendly employer, get a load of this…if you don’t have your own feline, the company offers a 5,000 yen monthly bonus ($42.00), called a “cat bonus” for anyone who is willing to adopt a cat of their own! I think a few U.S. companies ought to adopt this excellent practice! 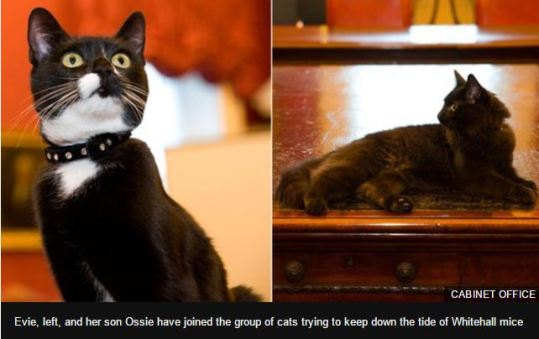 Just when you think you’ve read about all the pawlitical cats in the UK, there’s a new  job announcement. These two felines, hired as mousers, have the run of Whitehall and they seem to be enjoying their job.

Evie and Ossie are the first to come from the Celia Hammond Animal Trust – Larry, Gladstone and Palmerston (all purrlitical cat’s I’ve featured in the past) came from the better-known Battersea Dogs and Cats Home.

Evie is Ossie’s mother – a Cabinet Office spokeswoman said the cats would be looked after with donations from staff and were “settling in really well”. Concatulations to my moggie friends across the pond for their prestigious new careers.

Hello Furiends,I wanted to take my turn to chat this week about a group of incredible humans from a Facebook group called This Cat is CHONKY. They are the kindest, most wonderful group of humans you will ever meet. One note though, you have to apply to join the group as it is private. If […]

Walk Through The Web Wednesday 2/24

Happy Wednesday Furiends!I hope you have all had a good week. Our week was okay although I heard The Human speaking to someone at the stabby place on the phone. This did not bode well. Oliver was also less than enthused about these developments. Lily took the more direct approach. Unfortunately, the visit to the […]

Hello Furiends,It’s that time of the week when we felines get on (or rather in) our soapboxes and let the world know what we’re thinking! We are always looking for feline “chatters” for this feature. What gets your whiskers in a twist? Do you want to brag about your clowder or your human staff? We’d […]

Walk Through The Web Wednesday 2/17

Happy Wednesday Furiends,I hope you are all keeping safe and warm. We are worried about our Texas furiends, many without the comfort of heat and fires. At least, in our neck of the woods we have the dreaded winter and are always prepared to stay safe and warm, even if (heaven forbid) our electricity goes […]

Hello Furiends,It’s my favorite time of the week when our feline furiends have the opportunity to let the world know their thoughts. This week’s Cat Chat is a feline Cinderella story and a reminder of the power of love. Tyler lives with his human Mollie Hunt (a professional member of Cat Writers Association and fantastic […]

Walk Through The Web Wednesday 2/10

Hello There Furiends,I hope all has been fine in your neck of the woods this past week. Things have been fairly quiet around here, except for the very exciting announcement which I will reveal in a moment. I’ve been working hard on our blog and responding to all your wonderful comments (we love it when […]