Hello My Furiends,
Well it’s Wednesday and I for one am one thankful feline that all the purrlitical stuff is over! I hope you are all enjoying the day and that you enjoy my Wednesday web wanderings.
Purrs & Head Bonks, 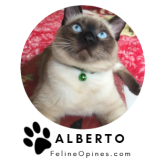 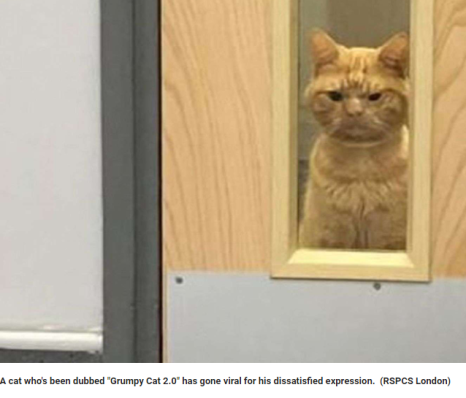 This is Saul, who was rescued off the streets of London after being hit by a car. He was in bad shape, with an injured jaw, eye and teeth. All of these contributed to his unique look. This little guy is on the mend, is very affectionate and despite his expression, one happy guy. He will be up for adoption soon as soon as he is completely healed. Here’s hoping Saul finds his furever home! 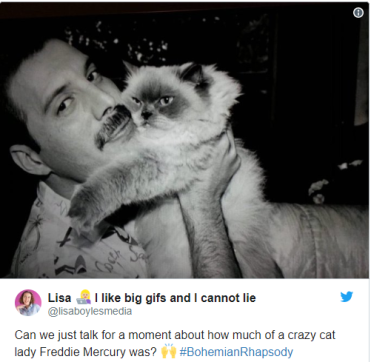 Now you humans can combine your love of theater, music and cats with Bohemian Rhapsody.  Despite reviews, which range from disappointed to scathing. The movie brought in $50 million at the box office over its opening weekend, over-performing expectations by nearly $10 million. And, although fans love the music and Rami Malek’s performance as lead singer Mercury, it’s clear cats are taking center stage as these tweets about Freddie Mercury’s cats suggest.  Rock and roll kitties!

Marvel Heroes Get A Feline Makeover By Fans – Nerdist 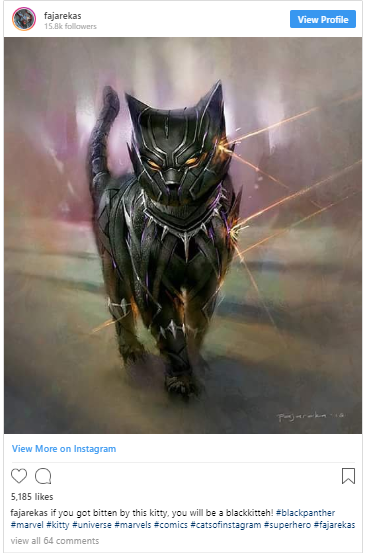 Marvel Comics has a history of characters who remind us of cats, or have the word “cat” in their name..  Case in point,  Marvel has Black Panther, Sabretooth, Black Cat, Hellcat, Shadowcat, and the list goes on and on. It was only a matter of time until an artist gave the Marvel heroes a feline makeover. . Fajareka Setiawan is a freelance illustrator and concept designer who has created a series called “Catvengers,” which feature various Marvel characters as fabulous felines. You can check out his heroic kitties in his Instagram posts..

Has Black Panther, the King of Wakanda, ever looked so cute? His costume might be made out of the strongest metal known to man, but he’ll still chase a laser pointer all across the living room floor.

I’ve said it before and I’ll say it again, when humans do stuff that benefits felines and little humans it’s a wonderful win-win. This program at the Cat Welfare Association brings shy cats and shy mini humans together with the Crime Cats Mystery Club.

The club invites students in grades 1-8 to read aloud to felines who are housed in the “shy cat room” at the shelter.  The program was recently awarded a 2018 Literacy Leader Award.

Now I know there are a lot of cat mystery writers out there (our Female Human is one of them) so let’s get the lead out human authors and get something like this started in your shelter! 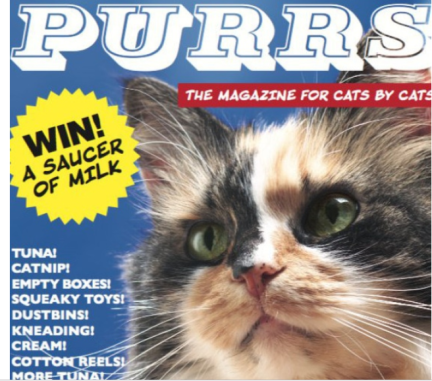 Well, well, it’s time you humans got something right. This is a real magazine full of all the latest news relevant to felines.  Readers pay £6.99 ($9.18 USD at today’s rate of exchange). There is great info for felines like the best places to hide, ways to avoid medication and other useful tips. Now if you’re a reader of our blog you already apurreciate the feline point of view so I’m guessing you’ll love Purrs Magazine!

Purrs is available to buy now at www.thecatmag.co.uk and £1 from every sale goes to the Feline Care cat rescue centre at East Harling in Norfolk.

Hello there furiends!It’s the day before Thanksgiving and I hope this post finds you all well and comfy and ready to eat some turkey! We’ve had enough snow in our neck of the woods to put us in the holiday spirit. Lily and Oliver and I have been arguing over the Thanksgiving greeting we wanted […]

Happy Wednesday Furiends,It’s been a pretty routine week in our neck of the woods. We’ve been up to our usual shenanigans. Oliver is still deaf to The Human’s pleas to stop burrowing UNDER the sofa cover. Lily heard that a friend of ours was feeling under the weather so she dressed up like a nurse. […]

Walk Through The Web Wednesday – 11/9

Well Hello There Furiends!It’s been a rather chilly and blustery week in our neck of the woods. We had a surprise wind and snow storm and The Human says it’s like Siberia out there. Another human she knows said that instead of bemoaning the weather, she was going to be grateful for the new trampoline […]

Walk Through The Web Wednesday – On Thursday – 11/3

Hello Furiends,I do apologize that I’m a day late with my feature but I did manage to obtain a little gift for you all as an apology for this (more on that in a bit). We are in the full throes of autumn here in our neck of the woods and that means much cooler […]

It is with many apologies that I must announce that our Wednesday news feature will appear tomorrow (Thursday) due to the poor planning of our lackey..err..Purrsonal Assistant. Your Furiend, Oliver

Walk Through The Web Wednesday 10/26

Hello Furiends,How are things in your neck of the woods? We are settling in to the cozy part of fall and love it when The Human turns on the fireplace. She got us a new fury rug which is quite soft and comfy. I purrfer hanging out on the cat scratcher but Oliver, who always […]

Hello Furiends,It’s been a busy week here in our neck of the woods. Most of the time was devoted to The Human putting the finishing touches on her purresentation at the Cat Writers Association conference. She enjoyed some great seminars at the virtual conference. We liked it because she was at home with us on […]

Hello Furiends,I hope your week is going well. We had a good day with the book launch which leads me to a shameless bit of self promotion. For today’s launch, Baker Books is offering a limited amount of gifts with purchase so you can buy a Christmas present and get a present for yourself! It’s […]

Hello Furiends,Fall is here and we love the cozy weather, especially when The Human comes home and turns on the fireplace for us for a little while. The Human bought us a drinking fountain. Lily and I are cutting it a wide swath but it’s early days yet and frankly, I don’t see the need […]

Walk Through The Web Wednesday – 9/28

Hello Furiends,Fall is arriving in our neck of the woods and Oliver is looking forward to sitting on the back of the sofa and chasing leaves across the large Livingroom windows (it will be a while before that happens though). When Lily went in for her dental surgery, the vet and The Human realized that […]