Hello There Furiends,
The Female Human is getting back to her happy place and that makes The Tribe of Five happy as well.  Fall is definitely here. For some reason, I always feel more hungry when the weather is cooler. This is why I’ve developed a helpful skill. When The Female Human opens the refrigerator door I can hop inside in 3 seconds before she notices. This allows me to purruse the contents but I’ve got to tell you, there’s not much of interest in there. 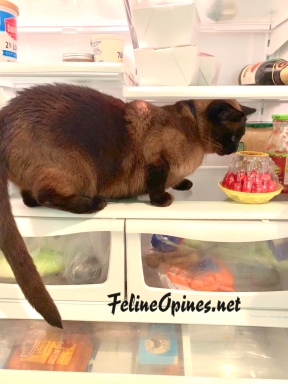 What are these strange red things? 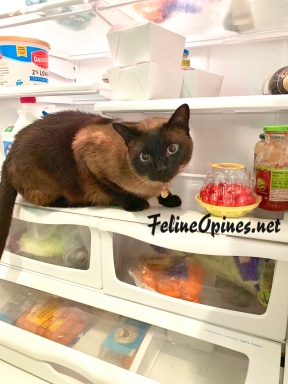 Human, please remove these red things and replace them with some nice, stinky fish.

As you know, food is of great importance to us and when The Female Human arrives with grocery bags, we are always excited, until we find out there is nothing in there for us. Note that this is not Tucker’s happy face.

I don’t see any cat treats in here.

Even though we are balanced on the edge of starvation, we still like to keep ourselves in shape and entertained so we often have cat races, or as we prefer to call them, zoomie sessions. This is Tucker and I getting ready at the starting gate, er rug. 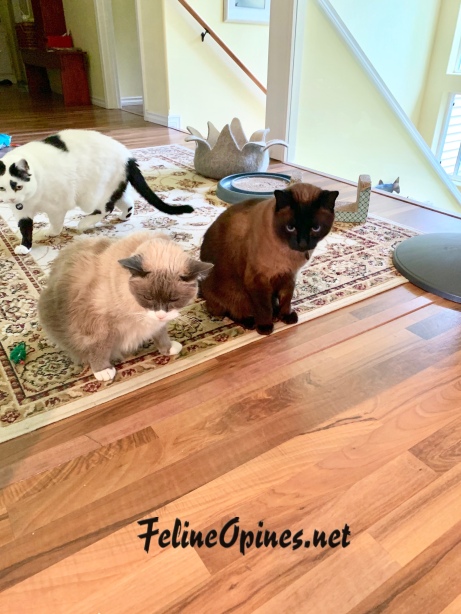 On your mark, get set…zoom!

I hope you are all having some fun at home and that your humans don’t forget the treats when they’re shopping. 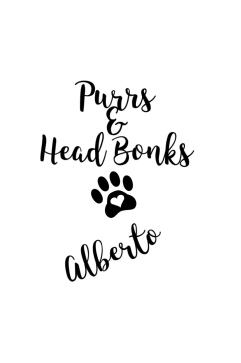 Groom Loves His Cat So Much, He Made the Feline His Best Man

You may recognize this dapper feline from the video channel Aaron’s Animals. His name is Prince Michael and I must admit I am a total fan boy. This human and feline have been besties since Prince Michael’s gotcha day and it’s only fitting that he’d be in the wedding. The human, Aaron Benitez says, ““We really are best friends, on and off the screen. I know I can always count on Prince Michael to put a smile on my face when I’m down or be my wingman when I’m up.” Now that’s what I call a purrfect furiendship. Now the only question is, will there be a wedding video on Aaron’s Animals?

“Mountain Lion” turns out to be a cat named Cookie 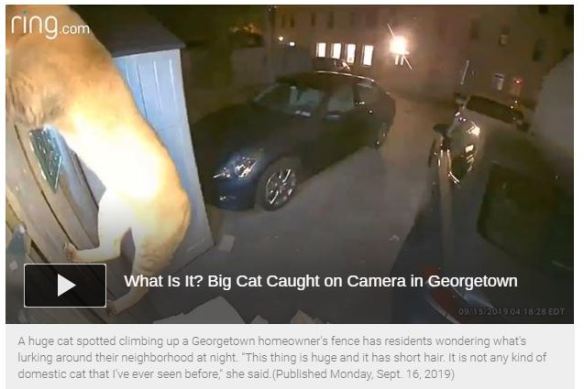 This story comes under the heading, “You city folk need to get out in nature more”. There was quite a bruh-ha-ha about a “mountain lion” roaming around a Georgetown neighborhood.  Dr. Lee Morgan at Georgetown Veterinary Hospital studied the film and came to the conclusion that since mountain lions don’t have striped tails and  the paws on this cat were far too small to be a mountain lion, it wasn’t a mountain lion. The good doctor’s theories were proven correct when a woman called the veterinary clinic and said she thought the cat in the video was her feline, Cookie. The doctor took Cookie’s file out and realized this was indeed the cat in the movie. Cookie is unusual feline, a Bengal-Burmese-Brown Tabby mix (in other words, a very long cat, kind of like me).

Cookie’s human assured the neighborhood that he is very friendly and docile and while the community pondered as to the reason the cat was roaming the around at that late hour, The vet said, “It’s not my business what [he] was doing out at 4 a.m..” 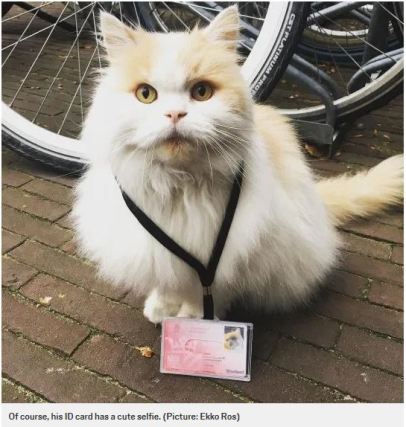 Campus cats have always been a “thing” but this scholarly feline takes being a campus cat to an entire new level. Professor Doerack.is a Maine Coon and Persian mix, and has been made an official student at the University of Groningen, Netherlands complete with ID card. He does have a permanent home with former students but he still loves to roam the campus, waltzing into his favorite classrooms. It’s said that the Furry Professor averages about 150 hugs a day. (My human needs to step up her game!)

That time the CIA tried to train cats to be spies

My regular readers know how much I love features about cats with jobs and this one is fantastic. The CIA decided that felines would make purrfect partners to obtain secret information. They quickly figured out that cats were not the best animals for their plan.

The CIA’s idea was that cats could be used to listen to private meetings and dubbed the experiment Acoustic Kitty. This happened in the 1960s when an attempt was made to listen to an unidentified head of state who was around some feral cats. The government planned to implant a small transmitter into the back of a cat’s neck with a microphone attached by a thin cord to the cat’s ear.

Needless to say they found out post haste that this was not a good idea. A Smithsonian.com article about Acoustic Kitty noted, “Cats are infamously disobedient, but the CIA believed that with the right training, they could become spies.” Well EXCUSE ME, this feline objects to the moniker, “disobedient”. I prefer to describe us as creatures who are not slavishly devoted to serving anyone.”.

All kidding aside though, what the scientists did to these hapless kittys was not funny and I, for one am thankful this project was a failure.

The fact that we felines sit, sleep and drape ourselves over anything and everything inspired this human to create Military Giant Cats (@ GiantCat9 on Twitter) which features giant cats in varying positions with military weapons and weapons systems.

The creator of these photos who identifies himself as Thomas, told Insider magazine, “I started this weird account because I love the absurdity of [the] internet, I love the cats, I worked several years in the defense industry.”

He says that he photoshops  photos of felines that people send him onto airplanes, submarines, battlefields, tanks, etc.

So my furiends, get your humans to send this guy a pic of you and you too may find yourself part of the Military Giant Cats group.

Walk Through The Web Wednesday- 8/10

Hello Furiends, The Human has been taken down by a summer cold and she’s been miserable. I wanted to share a photo with you so you could see for yourself what a mess she is. Needless to say that idea went over like a lead ballon. Too bad, it would have been hilarious but since […]

Oliver has some Caturday encouragement for all his furiends

Walk Through The Web Wednesday – 8/3

Hello There Furiends, Things are finally cooling off in our neck of the woods and some of the local critters are availing themselves of our little pond and waterfall. The Human enjoyed watching a mamma raccoon take her two kids into the water and under the waterfall but said human was so enamored of the […]

Walk Through The Web Wednesday – 7/27

“There is etiquette and then there are rules, rules that might be construed as draconian. “ Alberto Hello Furiends!This week The Tribe decided to share some of the rules that exist in our house and how we feel about them. We did write a book called, “Felines Opine on Etiquette, What Humans Need to Know […]

Walk Through The Web Wednesday – 7/20

Please Note, The scurrilous accusations and statements made by the felines in this blog are unfounded and downright libelous. No feline was denied kibble, wet food or treats during my absence. . Yes, we do not have air conditioing because it is rarely needed in this neck of the woods and the temperatures during my […]

We interrupt this blog…

Hello Furiends, We interrupt this weeks blog to tell you we will not have a Walk Through The Web Wednesday feature this week. We allowed our Purrsonal Assistant to depart on an 8-hour drive to a conference. We have made it clear to her that we will be demanding our pound of flesh when she […]

Walk Through The Web Wednesday – 7/6

Hello Furiends!Wednesday came fast as we allowed our Purrsonal Assistant to have Independence Day off. Thankfully she managed to get all her work done and our regular Wednesday feature was on time. Since she was out and about she didn’t manage to get any new photos of us so we told her, since we’re always […]

For all our Canadian furiends