Happy Wednesday!
It’s time for me to take you to some of my favorite spots on the web. I found some great stories so please enjoy.
Your Friend,

Cat Gets Herself Hired at Nursing Home – Petcha 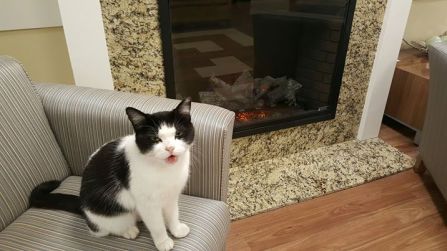 A cat walked into a nursing home……and the rest is history. This beautiful feline, now known as Oreo, wandered into St. Augustine Health Ministries in Cleveland, Ohio one day and she worked her way into an important job.

This little black and white bundle of joy began her career hanging around the outside of the facility where she lived as a stray. Staff began feeding her and taking care of her and her next “promotion” came when she was invited inside.  She now works there full time and brings happiness to staff and the residents. There’s no limit to what a career-minded cat can do!

The D.C. based, Humane Rescue Alliance is putting felines to work in local businesses. They provide businesses with resident felines, “hired” to patrol the property and keep rodents away. In return, feral cats  get homes — and they earn their keep.

The shelter provides spayed/neutered, microchipped vaccinated felines to the business. One ear is clipped to indicate that the cats are “employed”. The business signs an agreement to feed, shelter and care for their new hire for it’s lifetime. It’s a win-win situation. So far, two bars, an apartment complex, a real estate office, a brewery, two homes, a hardware store and a church have expressed interest. More and more cities are getting cats jobs in business and I say an enthusiastic “meow” to that!

I’ve written about the feline employees in the British government before and Larry in purrticular. Larry is one of several Whitehall pets, which include dogs. Unfortunately, Larry has been caught in the act of non-mousing.  Rumor has it that rather than catching rodents, Larry is taking cat naps and has recently been caught in the act by a photographer, leading some in government to speculate that Larry may lack the killer instinct important for politics. A photographer recently reported that Larry came face to face with a tiny mouse, which he allowed to escape after he played with it a while.

Note to Larry…when you have a cushy government job,  don’t let them catch you napping!

I love stories about adventure cats as much as I do stories about cats with jobs. These two felines, Fish and Chips  were adopted at different times, and are now the best of adventure-seeking friends.  The female human wanted to adopt a kitten but the male human (thinking he was really a dog person) wasn’t so sure. Then he discovered one of my favorite websites, Adventure Cats and he was convinced. First Fish came home with them. After deciding that having felines in the family was a great idea, they then adopted Chips. The adventures of these two and their humans are captured in stunning photography you can view at the Adventure Cats website. Reading about the life of these brave kitties makes me think I need to wander a bit further than our front garden!

Marttila went to Japan to see Cat Island. What he found out is that there are several cat islands off the Japanese coast and although there are beautiful felines to see, there are also issues in these places. The cats are not spayed and overpopulation is a problem, Still, the photographs are beautiful and a must see and these felines look very healthy and happy.

The female human is a great fan of the cartoons of Tom Fonder, the creator of The Adventures of Business Cat. She likes him so much that she uses a “Boss Cat” as a branding tool for her Coworking Facility.  Tom Fonder has pondered important questions such as “What would it look like if a cat was the CEO of a major corporation?” He provides the answer in his wonderful cartoons and describes his Business Cat as a hard-hitting executive, not afraid to milk the corporation cash cow for his own purrrrposes.  I hope you enjoy the cartoons as much as our female human does, although as a real-life Boss Cat (the female human is only a purrrrsonal assistant and typist) I do think Mr. Fonder is a bit harsh about feline management skills.

Hello there furiends!It’s the day before Thanksgiving and I hope this post finds you all well and comfy and ready to eat some turkey! We’ve had enough snow in our neck of the woods to put us in the holiday spirit. Lily and Oliver and I have been arguing over the Thanksgiving greeting we wanted […]

Happy Wednesday Furiends,It’s been a pretty routine week in our neck of the woods. We’ve been up to our usual shenanigans. Oliver is still deaf to The Human’s pleas to stop burrowing UNDER the sofa cover. Lily heard that a friend of ours was feeling under the weather so she dressed up like a nurse. […]

Walk Through The Web Wednesday – 11/9

Well Hello There Furiends!It’s been a rather chilly and blustery week in our neck of the woods. We had a surprise wind and snow storm and The Human says it’s like Siberia out there. Another human she knows said that instead of bemoaning the weather, she was going to be grateful for the new trampoline […]

Walk Through The Web Wednesday – On Thursday – 11/3

Hello Furiends,I do apologize that I’m a day late with my feature but I did manage to obtain a little gift for you all as an apology for this (more on that in a bit). We are in the full throes of autumn here in our neck of the woods and that means much cooler […]

It is with many apologies that I must announce that our Wednesday news feature will appear tomorrow (Thursday) due to the poor planning of our lackey..err..Purrsonal Assistant. Your Furiend, Oliver

Walk Through The Web Wednesday 10/26

Hello Furiends,How are things in your neck of the woods? We are settling in to the cozy part of fall and love it when The Human turns on the fireplace. She got us a new fury rug which is quite soft and comfy. I purrfer hanging out on the cat scratcher but Oliver, who always […]

Hello Furiends,It’s been a busy week here in our neck of the woods. Most of the time was devoted to The Human putting the finishing touches on her purresentation at the Cat Writers Association conference. She enjoyed some great seminars at the virtual conference. We liked it because she was at home with us on […]

Hello Furiends,I hope your week is going well. We had a good day with the book launch which leads me to a shameless bit of self promotion. For today’s launch, Baker Books is offering a limited amount of gifts with purchase so you can buy a Christmas present and get a present for yourself! It’s […]

Hello Furiends,Fall is here and we love the cozy weather, especially when The Human comes home and turns on the fireplace for us for a little while. The Human bought us a drinking fountain. Lily and I are cutting it a wide swath but it’s early days yet and frankly, I don’t see the need […]

Walk Through The Web Wednesday – 9/28

Hello Furiends,Fall is arriving in our neck of the woods and Oliver is looking forward to sitting on the back of the sofa and chasing leaves across the large Livingroom windows (it will be a while before that happens though). When Lily went in for her dental surgery, the vet and The Human realized that […]