As I noted on Wednesday, The Tribe of Five decided to enjoy the holiday and we even gave our Purrsonal Assistant an extra day off. And this is why my weekly feature is late.

Hopefully these holiday fun pics will compensate for our late posting. We enjoyed our holiday. Oliver and I spent some “bro” bonding time together. 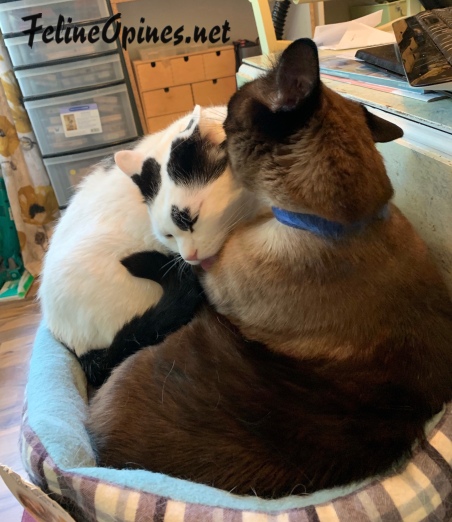 Oliver and I took a stroll in the garden. Ollie is making sure that all the neighborhood cats have the opportunity to admire his handsome self in the harness. I have no need of accolades from other felines and the logo of my weekly feature already showcases me doing a garden stroll (although I have grown out of the old harness). 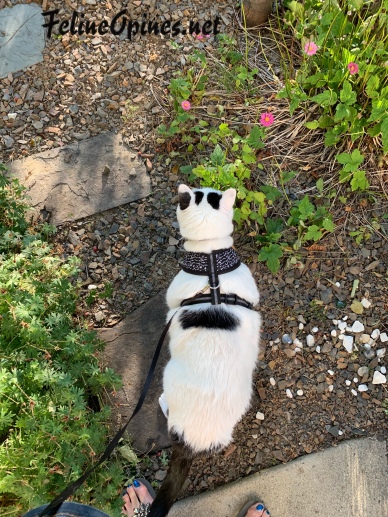 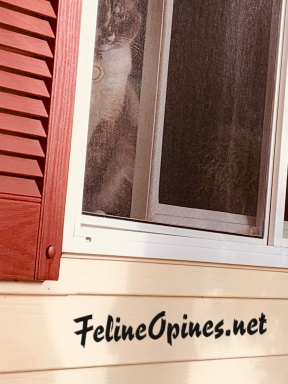 Oliver and Tucker enjoyed the sun inside as well, as did Jasmine. 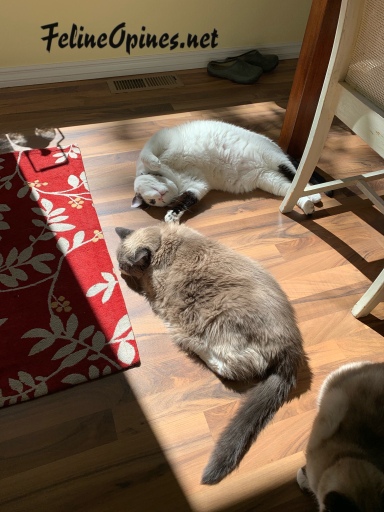 Happy Jasmine in the sunshine

As you can see, we felines are enjoying the last days of summer and, as the Farmer’s Almanac is telling us that winter is going to be seriously hard, we’ll take every bit of sunshine we can get!

Here are this week’s finds, I hope you enjoy them and the last of your summer days.

Cat mistaken for burglar, gets ‘detained’ by police

While responding to reports of a possible “burglary in progress” at a residence in Collier County, Florida, police officers made a furry discovery. Apparently, a small cat had gotten loose and wandered into a house while making “suspicious noises.”  Fortunately, the cat burglar was micro-chipped and was identified as “Bones” and his owners were contacted.

We felines can make ourselves comfortable anywhere and there is a cat Sanctuary in Rome, Colonia Felina di Torre Argentina that is located in a very hiss-toric place, the place  where  conspirators stabbed Julius Caesar 22 times outside the Theatre of Pompey, on March 15 44 BCE. Centuries later, in 1929, Mussolini excavated the area to reveal four temples that are 20 feet below the street level. Today, it’s the oldest open-air spot in Rome-and filled with felines.

Humans can view the temple complex known as Largo di Torre Argentina from the fenced-off street, after a  restoration, the sanctuary will open to tourists in the second half of 2021. Now, only  felines can get up close and purrsonal with this party of history. This cat sanctuary is the oldest one in Italy and features all sorts of felines, those with special needs and those who are elderly and they are taken care of by cat ladies – gattare who also work to find as many furever homes for these cats as they can. The sanctuary also has a spay/neuter program.

So if you humans are planning to visit the Eternal City, you can have your history and felines too!

Maria Sartzis and Oscar Pellicier were married Aug. 17 at Instant Elopements in Forest Hills, Queens. Their friends Tarsha Perrineau and Cory Pelletier attended the ceremony. The newlyweds met six months ago while shopping for cat food.CreditCreditAndrew White for The New York Times

Once upon a time two humans started a conversation in the cat aisle of the pet care section in Target. Now they are married! The female human (Ms. Sartzis) saw Mr. Pellicier scanning cat food labels and looking confused and she went over to see if she could help him (she has six cats and knows quite a bit about felines).  They had a 3-hour conversation and Mr. Pellicier told her about his three cats. The rest, as you humans say, is history. They married and now share their four-bedroom house with nine felines (gee I wonder where the humans sleep?) 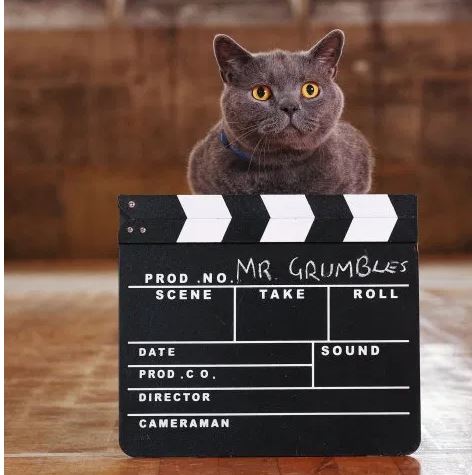 Will this kitty be the one to get the starring role? (Picture: Penpip)

Attention all you moggies across the pond. One lucky cat is about to have the best Christmas ever as Asda is auditioning for a feline friend to be the star of this year’s anticipated TV Christmas ad. The role will, if past Christmas seasons are any indication, see the lucky cat became a national treasure with cuddly toys and merchandise covered in their furry little face on sale

Auditions began in Harrogate, Yorkshire on Thursday, with cat owners from across the country queuing up to show off their cute kitties. Cats on leads and cats in crates were pictured with their owners, and others showed off their game faces as they prepared for their big moments in front of producers.

BilbCast – A Feline takes to the Airwaves to Podcast 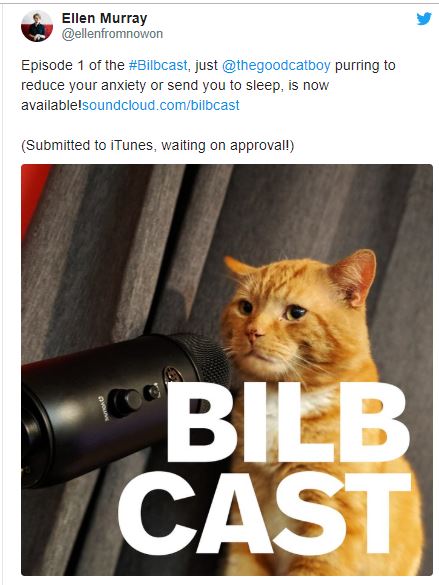 Bilbo The Cat has moved forward from his popular social media status on Twitter into the world of podcasts.  Now, you may be wondering what a cat podcast would sound like. Does Bilbo respond to listener questions? He may have future plans to do so but at the moment, his podcast consists of him purring into a microphone.  In the first episode, after some theme music, Bilbo starts into his purr routine.  Now, anyone who doesn’t have the good fortune of living with a feline can enjoy the soothing sound of purring.  If you’re dying to hear the podcast, just click on the link and go to the audio section.

Things are not panning out as Alberto thought they would.

Walk Through The Web Wednesday 1/08

Hello there furiends,Yes, I admit it, I took some time off and I quite enjoyed the rest (you know we felines need our rest!) But the proverbial party is over and it’s time to get back to work. I have a lot to cover since I’ve been slacking (and gave our Purrsonal assistant some time […]

Are you celebrating with Oliver?

Not Walkin' This Wednesday

Hello Furiends,The staff was not on the ball these past few weeks and I do apologize for that. I have no intention of walking through the web this Wednesday because it is an official day off. I would like to mention however, that this is “Walk Your Pet Month” and I have to say The […]

How Dare You Call My Cat Geriatric! (The Female Human Opines)

Although I didn’t say the words out loud that‘s exactly what I thought all those years ago when my beloved Miss P was being examined by the vet. I struggled to paste a smile on my face as I gazed into the blue eyes of my sassy Lynx Point feline. Granted, she was 10 years […]

I move toward the counter at the pharmacy, thankful for the HIPAA regulations that require a generous space between people in line.  The woman at the register stands, fingers poised over the keys. “Hello, name please.” I lean in toward her, whispering, “Aurit, Tucker Aurit.” She smiles and asks, “Date of birth?” There is an […]

Walk Through The Web Wednesday 12/18

Hello there furiends,How is your week going? The Tribe of Five is getting in the holiday spirit and the weather humans are saying we’re going to have two days of holiday snow. I realize that today’s picture on Weather Kitty is a bit deceptive, what with the sunshine and green grass and all but you […]