Hello There Friends,
So this week the humans celebrated this thing called Halloween.  The Tribe of Five would like to go on record as saying that there is absolutely nothing for felines to celebrate on Halloween!  And why do I say this, well, allow me to explain.

First, the humans have been known to attempt to shove members of The Tribe of Five  into ridiculous devices of torture that they refer to as “costumes”. They know better than to try that with this Alpha but they did attempt it with Alberto last year. (You may recall his blog about The Great Halloween Indignity) I am happy to report that this was the human’s first and last attempt to dress any of the Tribe of Five for this event. 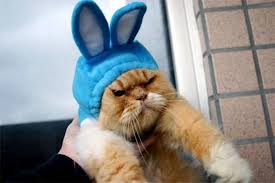 Still, not all cats have been able to avoid these indignities, I was horrified to see photos of felines strapped into these items of torture all over the internet (see samples above). Just take a look at their faces and tell me that they’re enjoying themselves! 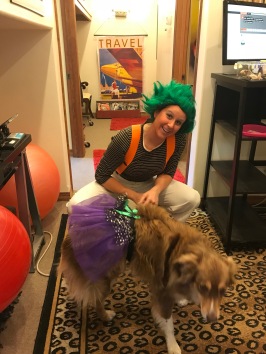 Now, if you are a kitty who’s managed to escape the whole costume thing there are other things about this Halloween that I find disturbing. For instance, the male and female humans leave five days a week to a place they call “the business”. Now since they own this “business” I can only assume that they have total control over what happens there. And this is why I got my whiskers in a twist when I saw this photo. Evidently they allow other humans to bring their canines to this “business”. I am highly insulted that they have not invited the Tribe of Five to work there (not that we felines actually work, we are far better at snoopervising.)  Just let me say the humans have a lot of explaining to do!

And, as if the indignity of knowing your very own humans are secretly spending time with other humans’ canines isn’t enough to send us into a tail spin, then there is the torture we go through every night of this Halloween. Now anyone with half a brain knows that the doorbell is not the feline’s friend. (Note to guests, you can find more about doorbells and other rules you should know here.) And it’s not just one “ringy dingy” or even two “ringy dingys”, it’s the constant torture of this despicable doorbell thing causing us to run and hide every few minutes. Poor Oliver only got as far as the dinner take out bag before the hordes of costumed candy thieves arrived.

All night it’s the same hellish routine, get settled on your favorite spot on the sofa, then the demon doorbell rings,  run and hide only to start the routine all over again in a few moments.  I don’t know what you humans find so entrancing about wearing stupid clothes and putting stuff on your face so you can hijack candy from your neighbors (and I might add that teaching this horrible practice to little children is beyond the pale!)

The Tribe of Five took a poll and we all decided we’re boycotting this Halloween thing next year and are considering drastic measures to keep the humans from opening the front door.  I mean just look at what Halloween did to Al this year!

So my fellow felines, unite against this anti-kitty holiday and join us in our boycott of this disgusting celebration next year. Felines Unite!!

17 thoughts on “Tucker Opines on Halloween”