There’s been a lot of change at our house and one of the most dramatic has been the arrival of two human friends and their canine. First, let me explain that the Tribe has never seen a canine, never heard a canine and never knew that anything like a canine existed. We see deer, raccoons and the occasional bear from our window perches but a canine, never seen such an animal. 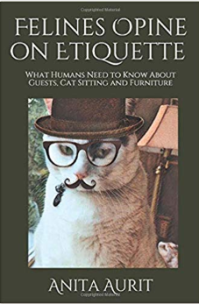 Needless to say, we were all a bit rattled by the arrival of this four-legged guest. Last year, the Tribe wrote a book for humans about proper etiquette regarding pet sitting. furniture and guests. Never in our wildest dreams did we think we needed to include a section about other animal guests!

The Female Human quite likes this dog although the rest of the Tribe is still deciding how we feel.

KD the (gasp) dog at our house waiting for the squirrel to come to the upstairs deck.

First of all, the dog has taken over the bird/squirrel viewing area. This is of great concern to Oliver and Alberto.  I don’t see why sharing the space is such a big deal to Ollie and Al but I do understand that the excited barking noise the dog makes when she sees the squirrel can be rather disconcerting. Or perhaps, terrifying is a better word because when she barks, Lily, Al and Oliver jump and then slip and side across the floors (like cartoon characters), looking for a place to hide. (Note, KD has never done anything aggressive to these chickens so their dramatic reaction is a bit over the top).

Lily is on canine watch. Tucker is watching the kitchen.

Since KD and her humans are staying downstairs, one feline is always tasked with guard duty at the top of the stairs. Tucker is exempt from this duty because he could care less. The dog has not interfered with Tucker’s breakfast, dinner or snack schedule so he refuses to purrticipate in this feline drama.

As soon as the dog’s paws touch the first step downstairs, the warning is issued and cats jump and scatter, heading off in various directions. This is a good thing for Oliver as a little exercise is needed where he’s concerned.

Alberto has proven himself to be quite the wimp. When the dog is in the house, Al whines and meows until The Female Human allows him access into my domain. I thought that I would be completely unaffected by what goes on in the rest of the house but now I have to share my space with this whiny, wimpy feline. Sheesh Al, get a grip.

Lily is quite content to hang out on top of the cat condo. Alberto will join her sometimes if he can’t weasel his way into the bedroom.

Lily takes a more pragmatic approach. She hangs out in the office, on top of the cat condo and demands that her wet food breakfast and dinner be served there. She seems to be quite content with this arrangement and, as that room is a dog free zone, she feels safe. 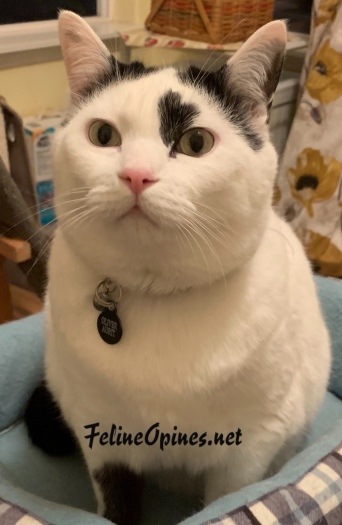 “Human, why does that canine make such a loud noise?” – Oliver

Oliver is almost as chill as Tucker unless KD the canine barks. He then hides under the small table in the living room or comes into the home office to complain to The Female Human. 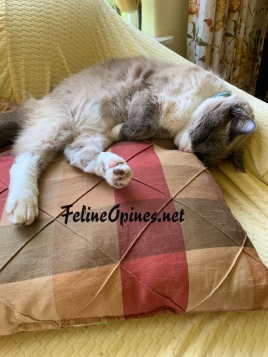 As I noted, this is Tucker, not bothered or interested in our canine guest.

As for me, well, I am usually unaffected by what happens in the rest of the house but Alberto, the big baby is getting on my last nerve. Sigh. Still, we are all furry family members and I realize I must extend some grace toward him.

So, my feline furiends, if you ever have a canine visitor, I hope they are as polite and well-behaved as ours. KD is a nice doggie (but don’t tell her I said that.)