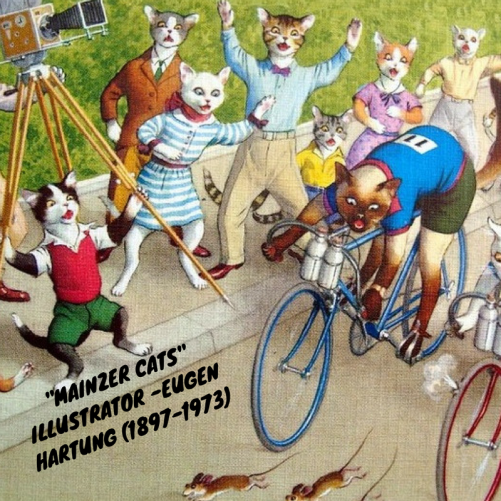 Hello Furiends,
Alberto here. I am feeling the need to opine about this thing you humans call the “Tour de France” because it’s kind of  a big deal around our house, especially with the Male Human. He gets up , feeds the Tribe and manages to get to the place he calls “work” to watch the Tour by 5:00am. Now this early schedule is of no consequence to me as I’ve had my breakfast and morning head scratch and I know there will be more petting after my early morning nap when the Female Human finally appears from the bedroom.

You may be asking, “Why is the Male Human so crazy about this ‘Tour de France’ thingy”? I think it’s because he likes to hop on his metal machine with the two skinny wheels and torture himself frequently, like those Tour humans. I find this kind of exertion baffling and so does the Female Human. She has her own metal machine with not so skinny wheels and a basket in the front. She has floated the idea of putting one of us in the basket but her lack of coordination and tepid attitude toward her own machine has me less than enthusiastic about the prospect, especially since she has been known to run into parked cars and mailboxes. 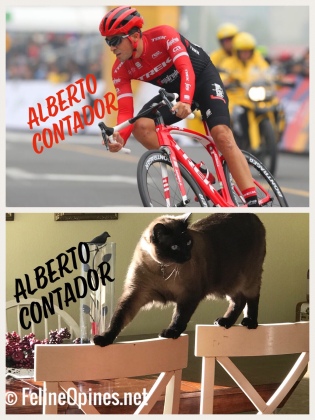 But I digress. I have some interest in the Tour de France because I am named after a famous Tour de France rider (now retired) named Alberto Contador.  I am sure you can see the resemblance., he’s a lean mean biking machine and I am a lean, mean feline machine!  I must say however, I am a bit dismayed by my namesake’s comment upon his retirement, he said, “I’ll gain weight and you’ll make jokes about it.”  I want to say “Alberto, don’t let yourself go! Have you seen my brother Oliver?! ” I’m happy to report he’s kept his lean physique so far. If you want to learn more about Alberto (the human) you can watch this video on Youtube, The Best of Alberto Contador. If you want to know more about Alberto, the feline, just subscribe to our blog.

Alberto’s Fun Facts About The Tour

Although I will respect the Male Human’s obsession with this Tour de France thingy I still don’t get it. From this feline’s point of view it’s far too much work  for too little reward. I will say though that it’s pretty cool being named after a famous cyclist and much better than being named after say,  the soccer player “Fat Ronaldo”!

42 thoughts on “Alberto Opines on the Tour de France”