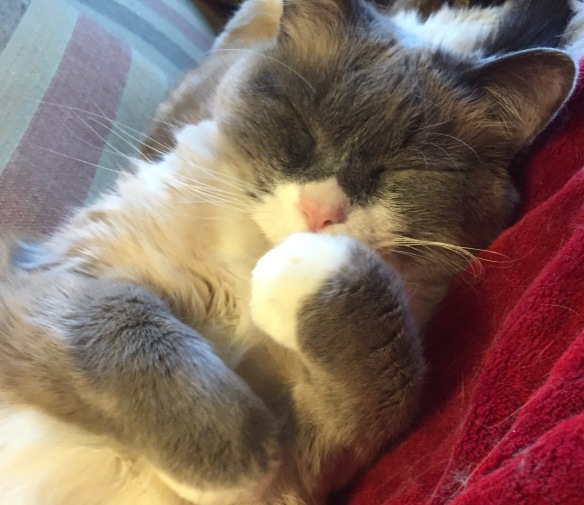 There were some exciting goings on in the wee hours of the morning.  I was cuddled comfortably in my favorite chair when I heard a loud “thump”. After the “thump” there were loud rolling sounds as though a small train was traveling through the living room.

The noise subsided and I went back to sleep. I was awakened next by the sound of a door slamming and then crashes and bangs emanating from the laundry room.

The female human came out of the bedroom to investigate the noises  and as it appeared the human was on the job, I went back to sleep.

It was only after I’d been served my breakfast and the humans discussed their take on the previous night’s events that I heard the damning evidence against Alberto and Oliver.

Evidently the first “thump” was Alberto stealing a spaghetti squash from the veggie basket, knocking it to the floor and then viciously attacking the offending squash. (See photo-Exhibit B).

After tiring of the squash attack he and Oliver headed to the laundry room where their shenanigans resulted in the accidental closing of the door. They proceeded to dismantle the room in order to attract attention and facilitate a rescue. (See photo-Exhibit A)

Never a dull moment with the Tribe of Five.

Enjoy your Caturday, I’m heading off to make up for my lost sleep.

2 thoughts on “The Case Against The Kittens”