Hello Felines and Friends of Felines,
Jasmine here. My friend (or more accurately “frenimy”), Lily posted about the “Great Barricade” and I thought I would give you an update. (If you haven’t read the reason for the barricade or my self-imposed exile, you can learn about it here.

I began to feel safer and the humans opened the gate (of The Great Barricade) in the mornings. I manged several forays through the house, sat in the kitchen window and munched some wheatgrass, headed downstairs and inspected the TV room and the human’s office space. Those were a glorious few days but then Lily began to figure out my schedule and she’d wait around the corner for me to step out of the bedroom and she’d chase me back in the room.

The humans are quite distraught about this (especially the female human). I heard them talking about something called “space switching” not sure that is and not sure if I will like it. 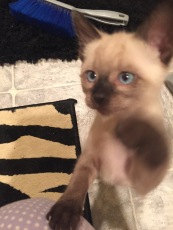 There has been one interesting development. The humans have added two shelter kittens to our family. They are very tiny. One is named Alberto (Contador) after the famous Spanish cyclist because he races around the house like he’s competing in the Tour de France.  Alberto (or Al) is a pretty good guy (as far as kittens are concerned). The other one, Oliver (Twist) is named because his main focus in life is eating and, if he spoke English, he’d hold out his cat bowl and say, “More cat food please”. He’s also fairly congenial as well.  The interesting thing about these kittens are that they are brothers. Evidently this is something the humans understand but I find quite perplexing. 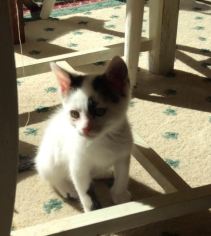 The female human has introduced both these little whippersnappers to me and after the obligatory hissing conversations, I believe they have acknowledged my place as Alpha female and I think we just might be friends (or benevolent ruler and subjects).   As you can see from the photo below, Oliver and I are sharing some morning conversation in my domain.

So dear friends (human and feline), although we’ve had some setbacks, the “Great Barrier” has proven to be a good thing as I can now look into the hallway and hear the sounds of every day life in the household. I (and the humans) are hoping that Lily will become so intrigued by the kittens that she will forget all about me and I will, one day soon, be sashaying around the house like the good old days.

3 thoughts on “Moving Past The Great Barricade”