Hello Friends,
It’s time to highlight my favorite feline finds on the web. And to all our readers, the Tribe of Five wishes you a Meowry Catmas! 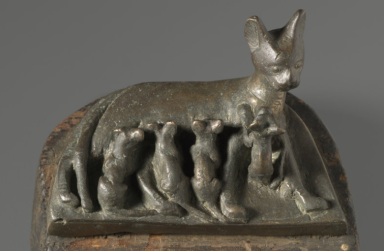 The Smithsonian Sackler Gallery of Asian Art has the purrfect exhibit for cat lovers called ‘Divine Felines’. The exhibit features cats, large and small from the land that honored felines the most – Egypt. The ancient Egyptians, enlightened as they were, watched the behavior of their felines, hunting, agility, protectiveness, etc. and they decided that these were all signs of divinity.  There’s much to learn at this exhibit – not all of it good though. I found out the Egyptians bred us felines to be offered to other Egyptian gods and goddesses, which begs the question, if we were considered to be gods, why where we sacrificed to other gods? Ah well, it’s all too much for my feline brain but if you are interested in the history of the fabulous feline, check out this exhibit.

My regular readers know how much I love stories about working cats and this is a great one. This cat named D-O-G (pronounced dee-Oh-jee) is a VIE (very important employee) at Support Dogs, Inc. in St.  Louis.  The dogs at this organization are trained to help people with disabilities and one important factor in this training is to train the canines to remain calm when faced with distractions. D-O-G’s job is to be a distraction as the humans train the canines to ignore the tail swatting and leash playing (check out the training video on the website).

D-O-G came from humble roots as a barn kitten who met the director of canine services a the organization when his future human stayed at a bed and breakfast. The director fell in love with D-O-G and asked if she could adopt him. The rest, as they say is history. 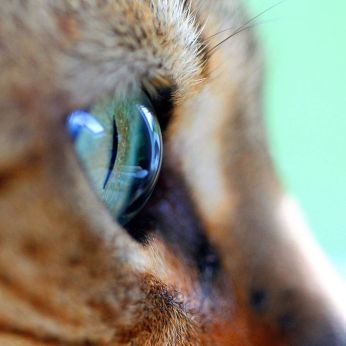 That article about the Smithsonian cat exhibit put me in an artsy kind of mood. In keeping with that mood, I found this very interesting article about a new visual purrspective on cat’s eyes.  A Norwegian photographer named Tina uses a Canon macro lens to photograph the eyes of her felines in residence, Zelda, Zonic and Zorro.  If you like the photos in this article and want more, check out more photos at Tina’s Instagram account and see another example of how utterly amazing we felines are. 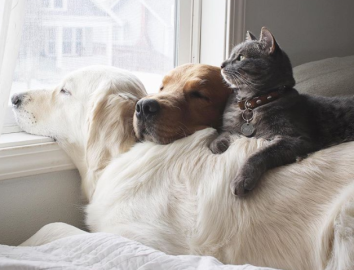 This is a story of a purrfect trio named Watson, Kiko and Henry.  Watson and Kiko are Golden Retrievers who love to pose for the camera and they also love cuddling with their best buddy Watson, who happens to be a feline. I have to say, the Tribe of Five doesn’t cuddle as much together as these three do! You can see more photos of these three amigos on their Instagram account.

If you are a cat aficionado then you probably have heard of  the felines Cole and Marmalade. Their humans decided that since a Christmas tree is out of the question (and if you’re a reader who doesn’t understand this I suggest you google “cats and Christmas trees” and watch a few videos) so they created a very cool Christmas Gingerbread house for their felines. They even have instructions so other inspired humans can do this for their felines.