Alberto here. As you may have surmised by the heading that my purrrrsonal assistant has once again proven to be less than adept at meeting deadlines. Still, I have to say, she has had a lot going on so I will cut her some slack. I have asked however, that this not happen again (I am still waiting for her response).

Without further ado, I give you the feline themed gems I discovered during my wanderings through the web. 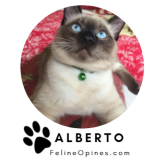 Lawyers Have Taken Over the Rally Cat Saga – NBC Sports

Some of you may remember my earlier report on the fearless feline who ran into the outfield on August 9th at the bottom of the 6th inning at Bush Stadium.  One of the ground crew captured the courageous cat and the feline has weaseled his way into the hearts of Cardinal Fans. Evidently, the plan was for Rally Cat to remain with the Cardinals group, in a cushy set up and they were even planning a Rally Cat promotion.

But human lawyers have stepped in and now there is a legal battle between the Cardinal’s organization and the St. Louis Feral Cat Outreach. Evidently these outreach folks feel it’s better to keep Rally Cat in a shelter than letting him have a good home. Take it from me, my brother Oliver came from a nice no-kill shelter but we’d much rather have the furever home we have now! 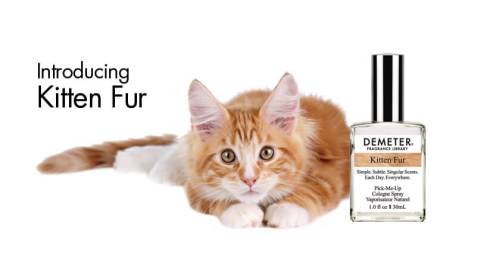 I’ve reported on some crazy cat-themed products, Apollo Peak Winery’s Feline Wines like Pinot Meow and  Catbernet. I’ve written about Meowijuana’s cigar shaped catnip treats and other great stuff but this product is really off the charts!

Demeter has created a kitten fur-scented perfume! They say that when you sniff this concoction it captures the “olfactory essence of the warmth and comfort of that purrfect spot, just behind a kitten’s neck.  This isn’t the company’s first foray into unusual scents, the first three fragrances they produced were Dirt, Grass and Tomato and they’ve since created other popular scents such as Laundromat, Gin & Tonic and Paperback. 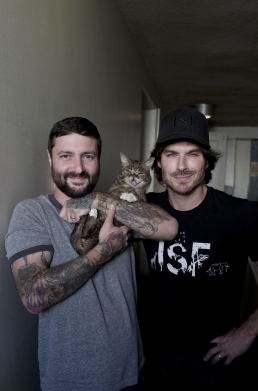 What is this strange event you might ask? Well it’s one of the premiere Feline events in the country. This year’s event (the third annual) attracted 15,000 cat lovers for a weekend of all things feline.  It was held at the Pasadena Convention Center in Los Angeles in August and featured new feline products, feline fashion and human feline themed fashion. Some of the world’s most famous felines were in attendance and the best news of the weekend….more than 150 cats and kittens were adopted during the event!

We felines have the capacity to learn so much and this story just illustrates how amazing we are (and the humans who are patient enough to teach us!)

Two paws up for this lady who is a former teacher of the American School for the Deaf. She came up with this idea after she adopted a deaf cat named Bambi.  She said that since her daughters learned signs from their infancy, she thought she’s try and teach her cats.

Silva, who is deaf herself, then taught signs to her two other cats, whose behaviors would be mimicked by Bambi soon after she arrived. So far her fantastic felines understand the signs for “come”, “more”, “stay”, “circle”, “play” “shrimp and some others.  It has also helped make her shy kitty more outgoing and playful.  Watch these clever kitties on the video. 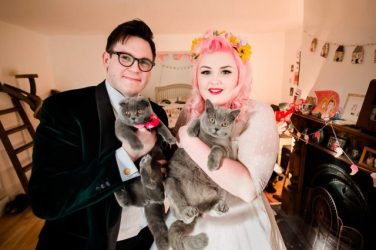 If my humans ever decide to renew their vows, this is the theme they should pick!  I find the choice of the Isle of Man for the venue very clever as I am sure all my readers are well versed in cat facts and know that the Isle of Man is the home of the Manx cat.

The beautiful bride and her bridesmaids wore cat shoes, earrings a cat fur scarf and a headband with little enamel cats peeking out.  There was a cat cake, cat decor, cat favors…well you get the picture! What a lovely wedding and a lovely couple. I wish them a long and prospurrrrous married life!