Hello,
The felines have allowed me one more follow up post before they take over the keyboard again. A friend and fellow cat writer, Rachel from Three Chatty Cats sent me a link to an article by Jason Schipkowski  a Mentorship and Training Manager with Pets for Life (PFL) at The Humane Society of the United States that speaks directly to the issues I shared in Amelia’s story. This article is too important not to share. 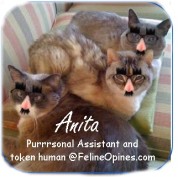 This article is from  Animal Sheltering on the Humane Society of The United States website. Dated August 2, 2016

You don’t have to look far to see fairly angry language implying how generally cruel people are (hello Facebook!) Jason Schipkowski explains the importance of examining how and why we may be fanning those flames.

It was 8 years ago when I got into animal welfare work, and I can remember the catalyst. I was at my neighborhood coffee joint when I saw it: a calendar for sale by a local rescue group. As I flipped through it, I was struck by wave after wave of pitiful before-and-after pictures—thin, crusty-skinned dogs juxtaposed with uplifting pictures of the same dogs beaming, furry and happy after rescue and rehab. I was moved to action and I signed up to help the group that had put out the calendar. Volunteering and donating turned into a marketing and development position within the organization. I was eager to give a voice to the voiceless and combat the hordes of malicious people lurking in the shadows waiting to do harm to animals.

It wasn’t until years later that I recognized just how pivotal the messages in that calendar were in shaping my initial perceptions of the field and what my purpose as an animal welfare professional should be. As the marketing guy, I wrote more web stories, social media posts, press releases and newsletters than I can remember. Often those communications included an all-too-familiar dramatic arc. It began with the wistful story of the abandoned animal, moved on to the backstory of unquestionable neglect or abuse, reached a crescendo at the time of rescue and told the story of dedicated rehabilitation by the rescuers.

That formula probably sounds familiar, and there is some truth to it. It’s certainly the story that solidified my passion for the work. But like a photograph that represents a single snapshot in time and doesn’t allow the viewer to see beyond the borders of the frame, there came a point where I felt like I wasn’t always telling the complete story. And when you don’t have the complete story, it becomes simpler to fill in the blanks with assumptions that fit the common narrative rather than seek a more thorough understanding of a more complex situation.

Think of a malnourished cat coming into the shelter. Typically what we assume is tied to that story is a “heartless person.” The common narrative doesn’t leave much room for what might in fact be a loving person whose cat bolted out the door, and they weren’t able to find them despite their very best efforts. What we put out there for consumption can be a matter of perspective; a story told enough times, and heard by enough people, can make them think of it as the rule rather than the exception.

The general public takes its cues from us, the experts. As such, there’s genuine influence in, and repercussions to, the narratives we create. Just take a cursory glance at the comments sections of any number of organizations’ social media pages—you don’t have to look far to see some fairly angry language implying how generally cruel people are. When we see that rhetoric become commonplace it’s important to look at how and why we may be fanning those flames. Are we taking the time to consider our stories with an open, balanced mindset, ensuing we’re broadcasting the most holistic and accurate message possible, or are we automatically reaching for that familiar, traditional message?

There’s no doubt, having someone to root against can be galvanizing. But what do we do when there’s no clear-cut villain? How does the story change when that thin dog is coming into the shelter only because his owner was being evicted, he got loose, and she hadn’t been able to get him some dewormer? While it’s a more nuanced story, we have a responsibility to tell it, or at a minimum acknowledge it’s not a case of an evil abuser hurting an animal and us sweeping in on white horses to save him.

Over time, the individual stories we tell become our organization’s identity. In aggregate, these stories can define our field as a whole, as well as how people direct their support. A development director at a local animal shelter recently told me about a tough spot she was in with a major donor. While there was a burning desire to ask the long-time supporter to give towards their organization’s work for underserved communities, her fear was that the donor, who had historically reserved her giving for severe medical cases of shelter animals, would be put off by the ask. In the end, the value of community-based work wasn’t discussed, and it was business as usual. Was that the right approach? I couldn’t say. What grabbed me was the thought of how many important discussions may not be happening or how innovation can be stifled for fear of swimming upstream.

I worry that our identity as a field is at times so inseparable from sad cases of perceived abuse that it’s become somewhat of a self-fulfilling prophecy. Because those before-and-after photos in the calendars are what’s expected and what’s seen as motivating, we often choose to seek out and prioritize those stories above all else, limiting our dialogue to what’s most familiar instead of pushing the conversation towards a more complete story. I also think many believe fundraising messages have to use negativity and despair to be successful because it’s all that’s been done before. They’re convinced positive stories don’t sell. If we conclude—without ever testing our theory—that a new or additional narrative won’t take appeal to people, we are choosing to idly sit by and not lead towards the next stage in our field’s evolution.

There’s often a murky confluence between discussions about abuse, neglect and “stray” animal intake and underserved communities. We talk about where the animal was rescued and speculate on the cause of his or her condition—“We saved yet another emaciated dog, who we named Pikachu, from the dangerous streets of an area west of the city that we all know to be synonymous with crime and animal neglect. People are callous, and they must do better.” I admit that even writing that sentence came all too easily for me, as I’ve written some variation of it too many times.

This insensitively (and inaccurately) paints entire communities with a broad brush. It leads to anger, skepticism and isolation toward entire groups of people rather than holding individuals accountable for their actions. It creates an aura of superiority on our part, not partnership. The result is that we disconnect ourselves from many animal-loving families who should be able to look to us as a welcoming resource. It can also set up a false “us versus them” mentality in the eyes of our staff and supporter base. These messages often perpetuate stereotypes that have staying power and affect the world beyond just our field.