Hello Folks,
It’s Tucker again. I had hoped that the saga of the PetSafe water filter would have been put to rest but no-when you live in a house with kittens you must expect the unexpected.

The female human wrote to the nice PetSafe people to see if she could purchase another plug in thingy to attach to the filter. Sadly, the part is not available. This information proved to be moot when the humans discovered that Al and Oliver had jumped on the counter, whacked the box with the broken filter to the floor and proceeded to play with (and break) the filter.  All the little black things in the filter were scattered around the kitchen and the male human spent some quality time crouched on the floor with a little broom and a scooper thing (but not the same scooper they use for our litter boxes). 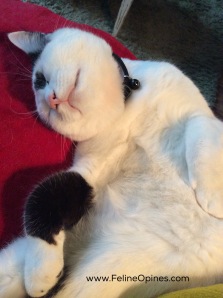 There are no photos of the destruction but I am including a photo of the terrible twosome who were exhausted after their shenanigans. Note the complete lack of remorse.  At least this shows the humans hard work to create a fear-free environment in our home is successful.

Will there be a replacement filter? Only time will tell but I would highly recommend that the humans wait until these little rascals settle down a bit.

It’s hard being the Alpha in this household, my kitten training work is not done.
Your friend and beleaguered Alpha of the Tribe of Five, 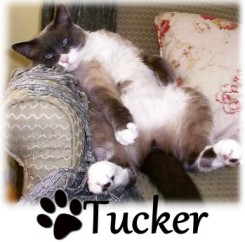