Meowza my furiends! This has been an excellent news week. I had a hard time choosing only five stories. I hope you enjoy this week’s web wanderings as much as I did.

By the way, the Tribe is still feeling like we live in the far reaches of Siberia (no offense meant to any of my furiends in Siberia). The wind is blowing, the temperature is freezing and the snowbanks are getting ridiculously high. I must say that it would be quite a bit warmer in the house if certain felines would not stretch their bulk over heating vents and hog the warmth.  Note exhibit A to the left. Oliver at his favorite vent in the kitchen.

Oh my whiskers, this story combines two things I love, cats who travel and cats with jobs.

This hairless little feline named Bug Naked lives the life of an elite wanderer with her Instagram-famous cruise captain, Kate McCue, who often features Bug Naked on her feed.

This feline’s human has some impressive credentials as she will soon captain Celebrity Cruise Lines new flagship, Celebrity Edge as the first female cruise ship captain in America.

The captain calls Bug Naked “sidekick” and “naked bundle of joy” and the reason she gets out of bed. Bug Naked and her captain are aficionados of the cruise lifestyle. See for yourself at  Kate McCue on Instagram  or follow Bug Naked for cruising cat focused photos.

Captain Marvel Cast Gush With Love For Goose The Cat 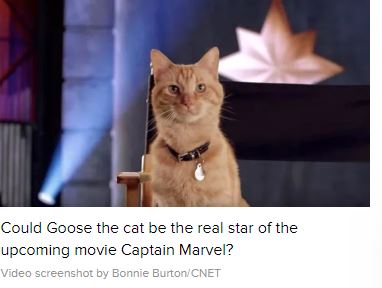 What better way to celebrate “Love your pet day” than to have actors Brie Larson and Samuel L. Jackson sing your praises? In the Captain Marvel movie, Carol Danvers (Brie Larson) has a cat named Goose, but Goose is way more than the run of the mill feline and was honored on Twitter for his acting skills. Now those of you who are Captain Marvel fans will know the Goose character in the comics is an alien species called Flerken, an alien that just happens to look like a cat. .

This is a short story and you’ll have to go to the link and watch the video but it’s an important story. After Twitter user @gabbytropea was accidentally locked out of her house, her cat follows her instructions and removes  a sliding door stick so that she can open the door. Two paws up for smarty cats!

Animal psychologists from Kyoto University have created safety videos for cats. As one of Japan’s largest auto parts and service chains, Yellow Hat is naturally very concerned with traffic safety, so it’s not much of a surprise that the company has put together a public service video on the subject. What is surprising, though, is that the video is by cats, for cats.

This video was created with the help of members of Kyoto University’s Camp-Nyan animal psychology research team, including Professor Kazuo Fujita, a specialist in zoology and cognitive science. Following the researchers’ suggestions, Yellow Hat made sure the video contains plenty of moving elements in order to command kitties’ attention.

Similar care went into the audio components. The team tested a variety of candidates for the video’s “narrator” before deciding on the specific set of meows that cat test audiences responded to most attentively. The background music contains the sound of chirping birds, and also sine wave sound patterns similar to the squeaking of mice and other small rodents, the aim being that cats’ hunter instincts will kick in when they think they hear their preferred prey hiding somewhere onscreen and keep them watching the video.

Now Yellow Hat has no problems if you humans want to watch this video too. You’ll probably learn something like some aspects of cat psychology when they’re out and about.

I never knew cat ladders were a thing, or that they were quite the thing in Switzerland.  You humans call it a phenomenon and it’s captured in a book by Brigitte Schuster in her book  Swiss Cat Ladders. She focus’ on the city of Bern and how the humans there accommodate the comings and goings of their feline friends through the exterior climbing structures they build. You can also find diagrams and inspirations for future cat ladder builders and I say, get busy humans, Swiss cats should not be the only ones to benefit from this purrfectly wonderful idea!