Hi There Furiends,
It’s that time of the week again. While we are enjoying a beautiful fall I’m thinking about all our furiends on the east coast of the United States who are suffering through the hurricanes. Stay safe my furiends!
Purrs & Head Bonks,

Ahead of Hurricane Florence Trucker Rescues 64 Dogs and Cats from South Carolina – Weather.com

There are a lot of heroes out there and this guy is one of them! Tony Alsup, a trucker from Greenback, Tennessee, drove his empty school bus into four different South Carolina towns to wrangle up as many shelter animals as he could before fleeing the storm. He rescued 53 dogs and 11 cats.  And he not only rescues them. he looks for homes for them too! The animals were taken to a shelter in Foley, Alabama and from there they will be sent to shelters around the country for adoption.

Just so you know, sniffer dogs aren’t all that. This cat’s human noticed he was curled up next to a bag it had brought home the night before. The local police took a photo of the cat next to the drugs and commented on Twitter,  “Forget police dogs, we should start training up cats 🐱👮‍♂️Apparently the owner found this in the cat’s bed, with the feline curled up next to it!” 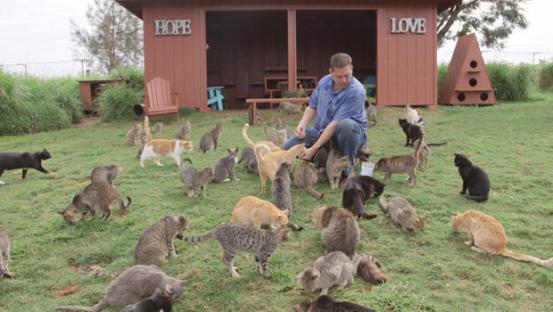 Now don’t get me wrong, I want every cat to have a furever home but if you don’t have your very own humans, this isn’t a bad gig.  This wonderful place is on the little island of Lanai. These cats live in amazing weather, get 3 squares a day and have a constant parade of loving fans who come to visit them.

Cat  loving tourists stay over night or fly in for the day to visit the sanctuary which is called “The Fur Seasons”.  Ninety five percent of the cats are feral and this human interaction is new to most of them. To the kind people who care for these felines I say “Aloha!”

Pastor Rescues Cats And Dogs Left Behind During Florence – HuffPost

This is a heavenly tale about a Pastor  and his congregation who set out in a boat to check homes for people needing help. They didn’t find any people but they did find two dogs and two cats in dire straights. These poor guys were abandoned, the homes were empty but fortunately, their angel came along and rescued them. Folks if you have to flee your home, please, please have a plan to take your fur kids with you to safety! Be sure and watch the video

Since our Female Human is an author (although not famous) I thought she would enjoy this. Lots of famous authors are enlightened enough to love felines and share their homes with them. One of my favorite cat-loving writers is Mark Twain because he had a lot of pithy comments about us fabulous felines. I chose this photo because that cat sure looks a lot like me. The female human in the picture is writer Helen Gurley Brown. She was the editor  of Cosmopolitan magazine in the 70’s and she shared her house with her two chocolate-point Siamese cats. (Good choice Helen!)

9 thoughts on “Walk Through the Web Wednesday 9/19”