It’s time to purrruse my favorite findings on the web. I hope you enjoy them as much as I did!
Purrs & Head Bonks,

You all know I have a penchant for adventure cats and aspire to be one myself one day soon so naturally I couldn’t pass up this story. Simon and his human JJ Yosh have been adventure pals from the day they met.

Yosh said he started training Simon the day he came to live with him at a few weeks of age. Yosh is always outdoors and he wanted to enjoy his adventures with Simon and now the 17-month old feline explores the beautiful Colorado scenery where he lives and he and his human also explore other areas of the world. Simon has his own Instagram account and he’s become a world-famous adventure kitty. Simon, you’re my hero!

Stop the mewsic: A cat festival is coming to London – Time Out London

Once again our friends across the pond prove that England is one of the most feline friendly places. The newest event will take place in July 2018.

The event will be held at The Oval Space in east London. Attendees will see cat videos, enjoy tasty vegetarian street food and visit the Meow Parlor to visit with adoptable shelter kittens.

There will also be a “Cat Lit” section where readings will be done from “Homer’s Odyssey” now before you wonder what feline connection this book has it’s about an abandoned blind kitten.

Now if you plan to go, you are encouraged to wear feline themed clothing (you know like my favorite shirt that says “real men love cats”.  There will even be a “Glamour Puss” beauty bar and of course, the event wouldn’t be complete without cat art.

If you don’t think you can wait until July, you can always visit London’s Cat Cafe (Lady Dinah’s Cat Emporium)  in the meantime.

Nathan the Beach Cat loves to swim in the ocean -Trending.com

First, let me begin by telling you that Nathan is a “she”.  This little kitty was dumped on a highway in Australia in a box. Her humans, Rian and  Melissa came to her rescue and the rest, as they say, is history. The family started taking her on their beach adventures and it was clear early on that this kitty was a lover of the water. She has so many adventures on the high seas that she’s now started her own Instagram account.

I’m quite impressed with these adventure cats and wonder if having black fur makes you a bit more adventurous than other felines. 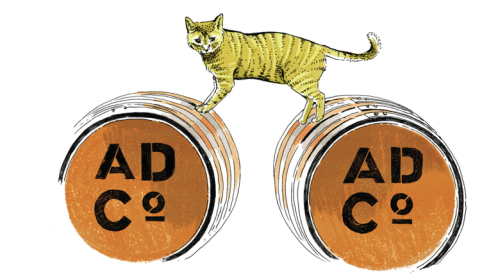 A few months ago I featured an article about Ricky, the distillery cat who has done such a fantastic job, the distillery is planning on hiring more felines. Well, who knew that cats had a long history of working in distilleries?

This article features some of the more well-known distillery employed cats such as Towser the Mouser of Glenturret which is one of Scotland’s oldest distilleries. Towser killed over 28,000 mice during her 24-year career earned her a place in the Guinness World Records.

If you’re interested in learning more about the history of this popular job for cats, you’ll love this article.

Once again, the British prove that they are feline fans!  People who travel through

Clapham Common station now can enjoy photos of cats rather than advertisements.  Citizens Advertising Takeover Service (CATS) decided they wanted to give passengers a break from the deluge of advertising and raised 23,000UKL to give the station a complete kitty makeover.

A total of 68 advertisements in the station were replaced with photos featuring felines from two rescue organizations, Battersea Dogs and Cats Home and  Cats Protection.  The clever folks of CAT also marketed the concept to cat owners, who donated 100UKL to make their felines famous. One gentlemen flew to England just to see his kitty’s photo displayed at the station.

James Turner, who spearheaded the campaign said, “We hope people will enjoy being in the station and maybe think a bit differently about the world around them. “Instead of asking you to buy something, we’re asking you to think about what’s really valuable in your life. It might not be cats, but it’s probably something you can’t find in the shops.”

Well I say two paws up for this idea and think we should think about something like this in the good old US of A!

According to the Daily Mail, owners Rian and Melissa serve as Nathan’s lifeguards. The couple adopted the kitten earlier this year, after she was found abandoned in a box by a highway.