Alberto here. Did you miss me last week? I wasn’t on strike, my purrrsonal assistant (the one with the opposable thumbs who types the blog posts for #TheTribeOfFive spent four days in bed with something she calls “the flu”. All I can say is I’m glad cats don’t get “the flu” because our human wasn’t looking too well at all .  But she’s better now and back at work so I’m walking through the web this week!

I’ve written about the cats in the British Foreign Office and the Chief Mouser at 10 Downing Street and this week, I learned that there is a Chief Mouser at the HM Treasury too!  Now I’m a red, white and blue blooded American feline but I must say, I have been thinking of attempting to convince the humans that we must relocate to the British Isles posthaste! Those folks know the value of felines (or moggies, as they call them). This photo pictures the “Honorable Chief Feline” emerging from the budget briefcase and Gladstone even tweeted about #Budget2017.  I like the attitude of Gladstone’s fellow workers, one said,  “You can still get on with work – and if you’re in a bad mood you can play with him in your lunch hour and he will cheer you up!” 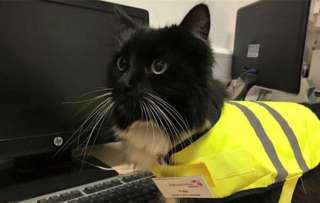 My next working cat story is from….you guessed it, England! Felix came to the station in Yorkshire when she was a kitten in 2011 and she has recently received a purrrmotion  Senior Pest Controller and has received a high-vis vest as well. She works hard keeping mice away and chasing pigeons off of the platform. There’s nothing like a girl in a uniform to make me purr!

Every working cat needs some R&R and Weston the cat from Washington state enjoys sledding with his human. Weston and his female feline friend, Elinore, the Adventure Cats,  enjoy spending outdoor time with their humans. I watched the video but it freaked meow-out. Not so sure I’m ready for a sled ride but I do enjoy jamming down the stairs in our house and sliding into the wall.

While Weston rides the shoulder of his male human, Eleanor waits patiently for her turn while she relaxes in the backpack of the female human,. 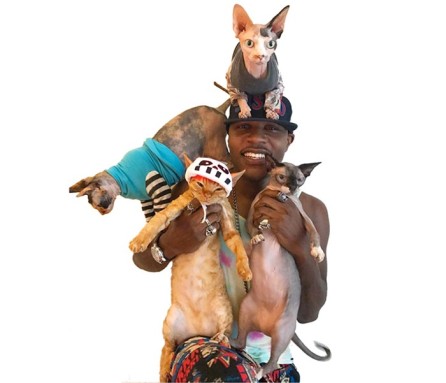 As you may know the Tribe of Five and their humans reside in the Inland Northwest which is why I was purrrticularily thrilled to read that the first Oregon Film festival on March 11th.  Now we do things a bit differently than they do in Howly-wood so this festival isn’t going to compete with the Internet Cat video Festival at the Hollywood Theatre. This festival will not feature already famous (and in my humble opinion overly exposed) feline stars like Grumpy Cat, Lil Bub or Maru. This festival will be featuring the future feline film stars.

The brilliant human who put this together, Nathan Marsh, is making this a celebration befitting the great Northwest with a human guest appearance by Moshow, the Cat Rapper, a local Portland phenome. There will be a DJ console with cat noises  for the kids to play DJ Kitty Boom Boom and lots of “furries”

If I didn’t have such an aversion to the metal “take me to the place of the white coats machine” I would insist the humans pack up my kitty tent and take me there to cover the event! 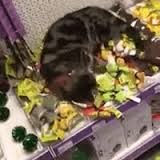 This story is a public service announcement. I know that many of my feline friends out there have (ahem) a bit of a “nip” problem. Properly managed this does not need to cause said felines down the path of crime and over indulgence. This feline, unfortunately, did not have a friend, furry or otherwise, who talked to him about catnip and this, sadly is the result. After all, if you humans and other felines don’t talk to your cat about catnip, who will?

3 thoughts on “Walk Through The Web Wednesday 3/8”