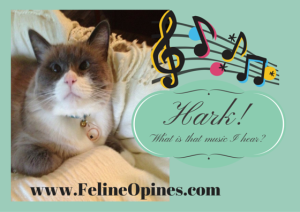 Our human heard about the Music For Cats Kickstarter campaign and when she read about the composer and the science behind the music, she had to pre-order the album.

This album is the result of two years of research born from David Teie’s theory on the fundamental nature music appreciation by mammals. There’s a lot more scientific stuff that’s beyond the mind of this feline but the humans seemed to understand and were quite impressed.

The female human set up the wireless speaker and played this compilation of kitty concertos for us. We’ll be reporting in soon about our reactions. In the meantime, have your humans play you a sample from the Music for Cats website.

6 thoughts on “Music for Cats”