Hello Furiends,
It’s time to meander down the Internet Highway and see what fabulous feline news is out there. I hope you enjoy this week’s stories.
Purrs & Head Bonks,

I have reported on CatCon, a truly fabulous feline festival and now those moggy-loving humans across the pond are giving CatCon a run for it’s money.  The promo says that CatFest will bring stylish buzz-worthy cat products, inspiring talks, books & art, music, fancy dress (that’s what the folks across the pond call “costumes”) vegan street food, cat-themed cakes and cocktails..all while helping cats in need. Meowza! Those folks know how

to throw a purrfectly fabulous pawty! While The Female Human was oohing and aahing over the cat related jewelry and clothing, The Male Human decided the “Howler” cat house that looks like an amp is the cat’s meow. And since my brother Oliver and I are quite mewsical and especially enjoy the days The Male Human changes his guitar strings, we think this would be a purrfect addition to our house!

Every one of my feline furiends must insist their humans read this article! The Tribe of Five  can’t decide which we like the best. I am purrsonally fond of the human who hired an interior designer to create cat space for his felines. Lily loves the built in catio (we have a pop up tent thingy but it doesn’t hold a candle to this amazing space). Oliver thinks the birthday pawties are nice as does Tucker (anything that includes food is top on the list for those two). Jasmine thinks the tent and tablet is the least humans can do for their felines in residence! What’s your favorite?

Now I will be the first feline to give credit where credit is due but methinks making this cat a rescuer might be stretching the truth a tad. While it’s true that Rosie Bloom, a little budgie had been missing for 7 weeks, the fact that 7-month old feline Bear showed up with said budgie in his mouth could not be strictly described as a rescue. You see, our furiend Bear,, who lives about a mile away from the Budgie and her humans, is in the habit of delivering mice and other birds to his family. Fortunately, for all involved, the screaming budgie was removed from Bear’s mouth and eventually found her way home via a Facebook post. Hero or not, Bear did perpetrate the rescue of this feathered friend and everyone lived happily ever after. The end.

Finally after years of us felines getting a bad rap about our ability to coexist with canines, the truth comes out. A new study in the Journal of Veterinary Behavior — one that uniquely looks at the relationship between cats and dogs sharing the same home — suggests we get along just fine. The researchers surveyed 748 households with canines and felines.  These homes were located all over the world in places like the good old U.S of A, Europe, Australia and more. Over 80% of those folks said that the inter-species relationships were just fine.  And how many said that there were relationship issues in their homes, only 3%. So folks if you’ve been wanting to adopt a dog to add to your feline household or a cat to add to your canine household, get to the shelter and do it now! 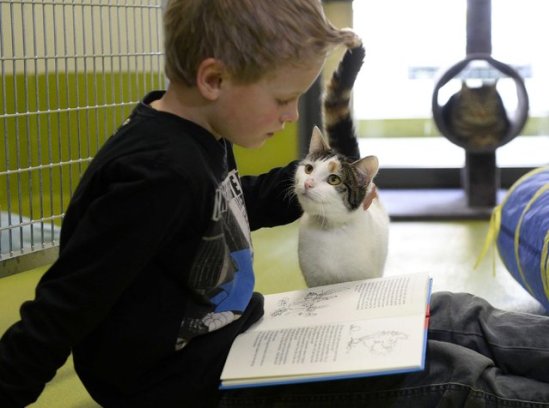 I’ve heard a lot about great programs where little humans go to libraries or shelters and read to dogs. Now, don’t get me wrong, I think this is a noble and pawsome thing to do (they do it at our local shelter too), but I’ve had my whiskers in a bit of a twist because I never heard or read anything about the benefits of little humans reading to shelter cats. Until now that is.  This program doesn’t just improve social skills for the little humans but for the felines as well. It also helps to calm cats and help relieve the stress they feel because shelters can be stressful places. Does your shelter have a program to read to cats? Tell us about it! If you don’t and want to learn more, check out El Paso Animal Services Facebook page.

8 thoughts on “Walk Through The Web Wednesday 8/1”