Hello Friends,
Alberto here. Boy have we been busy with the April Blogging A to Z Challenge. My little feline noggin is getting tired looking for new ideas to write about every day. You know we felines are not overly excited about working under pressure but we committed to do the thing and The Tribe of Five believes in following through with our commitments. The Female Human is a bit cranky about all the typing though.
Purrs & Head Bonks, 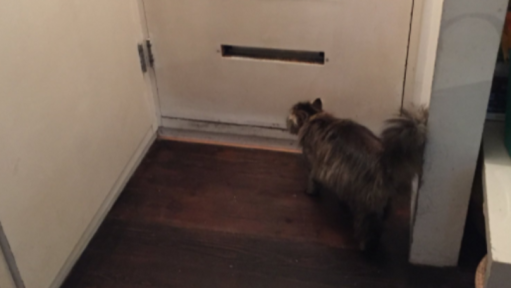 Let me just say that this is one of the nightmares The Tribe of Five has every time the Humans go away. Humans, PLEASE make sure that the cat feeder has keys before you leave town. Evidently, someone from work was going to drop the keys through the mail slot of the neighbor’s door so they could feed the cat. Except it was the wrong door and the neighbor had no key. What did the neighbor do? Their solution was quite innovative but let this be a lesson to all you humans!

We felines will never understand why you humans bully. Granted, we felines will mix it up a bit now and then but it’s only for play. The little boy’s parents were shown a photo from a rescue in Minnesota. Now mind you any cat photo is worth another look but this cat was extra special! The kitty had a cleft lip and heterochromia iridum (different colored eyes) just like the little boy Madden. The boy’s parents knew that cat was destined to be a part of their family. Some kind friends helped the family fund the road trip from Oklahoma to Minnesota. If there ever was a match made in heaven, this one is it. We give this story a 2-paws up and wish Madden and his feline friend many happy years!

What Your Cat’s DNA Can Tell You – LifeHacker

We felines are curious things. I mean, look at me and my brother Oliver. One of us looks like a pure-bred Siamese and the other, hmmm, is a stocky black and white feline with a heart over his eye. Our Humans often say they’d love to know the story of every Tribe of Five member but because we were all rescues they have no history about us.  And then there’s our strange behaviors like why do we all run and hide when a human sneezes, why do some of us love beef and the others turn their noses up at it, and there are lots more questions the Humans would like to have answered.

Now not all of your questions about your fabulous felines can be answered but you can get more information about them from Basepaws, a company that says through a DNA kit, you can learn about your feline’s ancestry and their habits.

Our humans were intrigued by this article because the human who wrote it said that the kit covers several areas such as health, ancestry, predicting traits, physical traits and more.  Can you imagine what our Humans could learn about us? Now that I think about it, I’m not so sure I want them to know all our secrets!

Catios Are The Newest Way to Spoil Your Felines – Simplemost

I’ve reported on catios before but they are becoming more of a “thing” and, as felines who enjoy the out of doors safely at our house, I thought this article was great, offering many options for you humans to choose from. Our Humans didn’t want a permanent structure built on the house (and during times when we have 6 months of winter I can understand) so they got us a “pop-up” catio that can be moved from the upstairs deck to downstairs by the waterfall or on the front porch. We blogged about it if you want to see what our catio is like. So my feline friends, tell your humans to get you a catio posthaste!

The singer, Granger Smith recently wrote a parody of his song, “It Happens  Like That” titled, “I happen to like cats” and we think it’s quite a catchy tune. The best part about this song is that he and his crew took over a cat cafe to film the video and this wasn’t some publicity stunt, Granger Smith DOES like cats! Meow!

9 thoughts on “Walk Through The Web Wednesday 4/4”